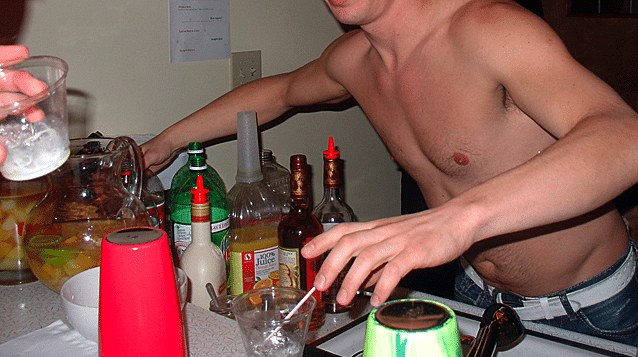 How desperately do you want to be a frat boy?

Here comes a story kids that admittedly has got me wincing from one side of my face to the backdoor of the other side of the world. Then again I’ve never aspired to making it in some ivy league frat house. For those of you who have, then perhaps this article is just a coy reminder of the trials and tribulations you were subjected to in the making of being an uber frat boy.

Argues one Dartmouth college student, Andrew Lohse who has now gone public with the wonderful indoctrinating techniques of one frat house (Sigma Alpha Epsilon fraternity, SAE) after local administrators failed to respond to one then anonymous (but no longer, as you can see he come out with his real identity thank you very much bixches) request first presented to them in November 2010 seeking redress on issues of being subjected to hazing:

“I was a member of a fraternity that asked pledges, in order to become a brother, to: swim in a kiddie pool full of vomit, urine, fecal matter, semen and rotten food products; eat omelets made of vomit; chug cups of vinegar, which in one case caused a pledge to vomit blood; drink beers poured down fellow pledges’ ass cracks; and vomit on other pledges, among other abuses,”

Semen, Urine and vinegar? Hmm. And so if the grocery store supplied the vinegar, who then ahem supplied the semen, vomit and fecal matter? The head frat boy or his minions? Or were they imported from some other less worthy college? Cause really you’d have to pay extra to swim in head honcho vomit and semen. Well at least I would pay premium for it. Wouldn’t you?

April Thompson, Associate Dean of the College for Campus Life on the other hand argues nothing was done with the young man’s allegations cause he failed to produce evidence of his allegations (didn’t anyone think to look under the frat house’s basement or locker marked- this is for the newby bixches this weekend: PUKE & SEMEN).

But just in case you think officials didn’t take allegations seriously there’s this:

Hanover Police received information from the Dean of the College’s Office that hazing might take place near Bartlett Tower and the Bema on Dec. 1, 2010, and “staked out the area” on the night in question, Hanover Police Chief Nicholas Giaccone said in an interview with The Dartmouth.

“One of the officers had night vision equipment, and we did follow and see people leaving from SAE, and they were found in the Bema area,” Giaccone said. “What we observed did not reach the level of hazing.”

Night vision equipment? Now that’s commitment to the cause….That said, rumors have persisted that hazing is the done thing:

Since the investigation into the December 2010 “Hell Night,” “there have been other reports of hazing in the Greek system in general from the College, and we have looked into them,” Giaccone said. None of these complaints, however, have spurred investigations of the same extent, he said.

That of course hasn’t stopped Andrew Lohse to indicate on January the 20th to de-pledge (what took him so long in the first place right if he was so humiliated?).

Responded Lohse over the summer in 2011:

“I think the hazing question at SAE has been answered — word got backchanneled through National that what was happening had to stop, scaring everyone, and now giving me and others who didn’t like hazing a big amount of leverage from the inside with which to end the practices once and for all,”

Then of course there’s this surprise gimlet, that may or may not throw some caution as to Mr Lohse’s character and verifiability to be a reliable or at the very least cogent source on allegations of hazing:

Lohse pled no contest to charges of cocaine possession and witness tampering and guilty to a charge of unlawful possession and intoxication on July 14, 2010. The no contest plea legally states that a defendant will neither challenge nor claim guilt for a charge.

The incident occurred after another member of SAE reported seeing Lohse and several other students using cocaine at the fraternity’s physical plant. Lohse allegedly spat on the witness and poured out a beer on the door of his room following the initial incident.

Oh dear, boys will be boys until one of them gets found out for their own indiscrete behavior and begins a crusade to get even.

Let’s hope you wont have to swim in a bucket of piss and vomit this weekend and if you do, Mr Lohse will be there to hold your hand. Or if you’re lucky to piss all over you…