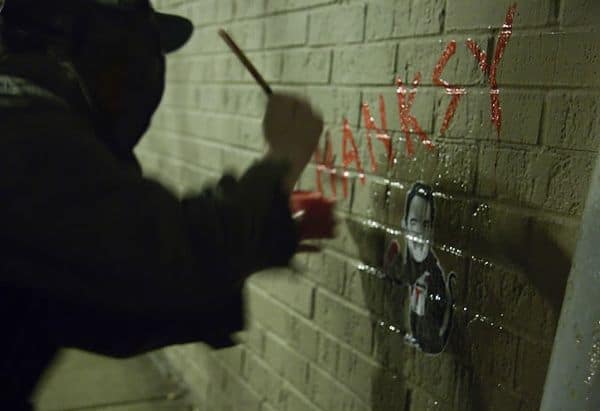 Over the past few months NYC has been graced with one of the best street artist spoofs ever conceived.  Calling himself Hanksy the artist has been posting Banksy like works with Tom Hanks face on them.  Hanksy‘s work have been seen from LA, Chicago, to NYC and after seeing his works all over LES paired with the huge internet Buzz I realized I had to meet this guy.  After a month of searching I ended up finding him in an LES bar in quite the unusual way (to this day I still dont know his real name).

After a few short emails and a confidentiality agreement I was able to set up a meeting and ask him some questions.  Of course being the true Banksy impersonator that he is we didnt get too far but I think the interview bellow explains it all!

Johnny:  In your own words “Who is Hanksy?”

Hanksy: Often enough Hanksy is a time-obsessed systems analyst, who travels worldwide resolving productivity problems at FedEx depots. Other times he is an Alabama simpleton who journeys across the globe, meeting historical figures, influencing popular culture, and experiencing many of the 20th century’s historic events firsthand.

Johnny:  Is there a story behind how you thought of the Hanks-Banksy mash up “Hanksy”?

Hanksy: Yes. Stranded on an unoccupied strip of land deep in the Pacific Ocean and distraught with the notion I’d never seeing my long-term girlfriend Kelly again, I found comfort in the ever-fragile crevices of my imagination. That’s where Hanksy was born. Out of desperation and escape and a found memory of the late Bronx rapper Christopher Lee Rios.

Hanksy: Although I’m not the hugest Shelly Long fan, to answer this question all one needs to do is view the Rude-Goldberg-like chain reaction scene in the 1986 Richard Benjamin-directed masterpiece, The Money Pit.

Johnny: How do you decide which Banksy images to rip off?

Hanksy: At a fictional carnival in Cliffside New Jersey you’ll find a turn-of-the-century fortune telling contraption. Generally Zoltar Speaks, the rusty coin-operated clairvoyant, only specializes in generic gypsy parlor tricks, but he is also capable of answering a few of life’s Big enigmas. Mainly being, which popular Banksy pieces can be easily altered to make reference to one of Tom Hanks’ many great films. 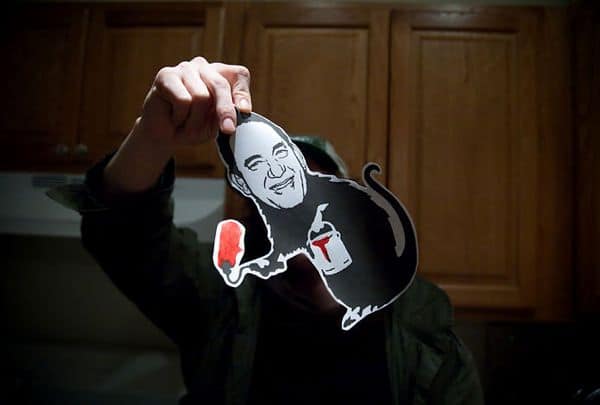 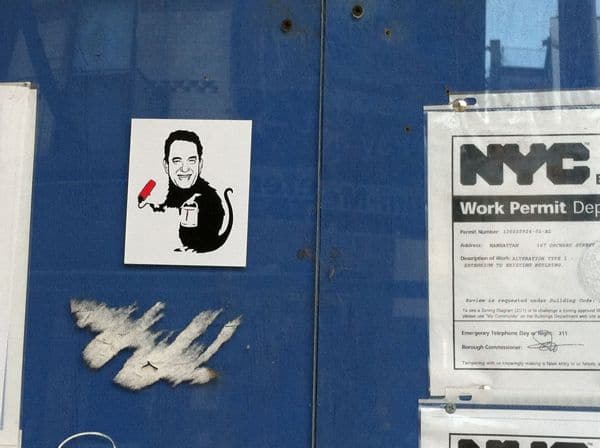