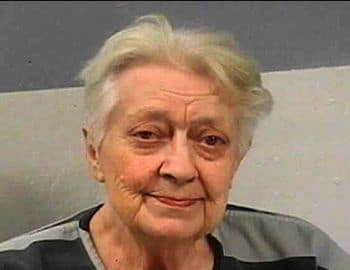 Incensed, Peter Desjardin demanded his wife put the gun away cause she didn’t know how to use it and she might end up killing someone (chiefly him). Annoyed Dorothy Desjarden then insisted that she in fact did know how to use the gun by firing at her husband as he shielded his face striking him in the right arm.

Fortunately for him instead of containing an actual bullet the gun contained fine grain pellets (used for hunting small animals) which lessened the impact, resulting in Peter Desjardin being admitted to hospital and promptly released. Dorothy Desjarden on the other hand has had no such luck.

Charged with second degree domestic assault, with a $5000 bail she remains in jail as her husband refuses to allow her back in the home after obtaining an order of protection against her. All the more merrier for Peter Desjardin as he can now continue his purported affair with his wife’s hairdresser unimpeded.

How does the saying go again? – ‘Hell hath no fury like an elderly woman scorned.’

** Editor’s note: What does strike us very odd about this case is had roles been reversed and it was Mr Desjarden who fired off the gun he’d probably be spending the rest of his days in jail for attempted murder. The fact that the gun wasn’t loaded with an actual bullet we think is besides the point, as Dorothy Desjardin’s intent at shooting directly at her husband was to most definitely kill or the very least afflict grievous bodily harm. Something for some reason most media outlets are not bothering to point out….