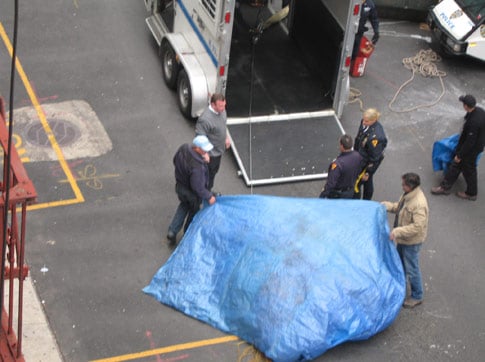 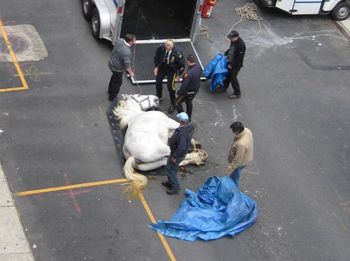 Animal activists are not amused…

What to think, what to say? It’s been reported that a stout white equine collapsed yesterday morning on West 54th street and 8th avenue and soon thereafter died in the middle of traffic. At this stage no word on what led to the horse collapsing and passing away, but Animal Activists are speculating that the rigorous demands on the white stouts may have led to the horse’s demise.

Opined Elisabeth Forel of the  Coalition to Ban Horse-Drawn Carriages: ‘ A healthy horse doesn’t die on the street.”

Unless of course the horse wasn’t all that healthy in the first place which prods the question was the horse being treated or deprived in a way that forced it’s demise? Or is it a situation that the horse was frankly sick and irrespective of whether it was on a field, or trotting with its cargo in the middle of Manhattan it’s time had come. After all, seemingly healthy people have been known from time to time to pass away in the most strangest circumstances. But then again should we be surprised that a horse which is preternaturally designed to be on a field should succumb to the stress and rigors of being a carriage horse in a stress induced city like NYC?

Responded a spokesperson for the Horse and Carriage Association of NY:

“It’s a tragedy. It’s not something that happens regularly. Our horses are taken care of.”

Then again how much can one shield an animal from the stresses of life in a chaotic city like NYC? As much as the death of the horse is unfortunate, it has long been held one of the joys of many tourists to take a stout horse up for a trot. The allure of tourist dollars is unlikely to put a stop to a past time that is often portrayed as a sweet serenade.

A necropsy is pending to determine the exact nature of the horse’s demise.