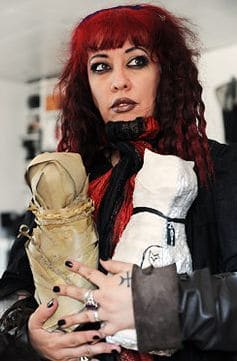 Eternity is finally now an option…

For most pet owners, the death of an animal is usually the last time they will ever see their pets in one piece. Enter then Brooklyn native, Sorceress Cagliastro who runs a thriving business that for a sum between between $800 and $4000 she will take your deceased pet (assuming it does not weigh greater than 100 lbs, sorry great dane lovers…) and preserve its former semblance into that of a mummified specimen. The good news of course is that she soon intends to extend her business from pets to humans in the near future as well, but more on that below (yes, we know you’re marveling at the idea of mummifying your dying grandmother….)

“To me, mummification is the ultimate honor because there is nothing that would keep your loved one around longer,”

Hmm, indeed… and she continues:

“When people tell me they want to do this thing, the first thing I am is impressed. You must have really loved that animal,” she continued. “I have an enormous amount of respect for the animals entrusted into my care.”

In case you’re wondering how Cagliastro first got her taste for mummification (surely you’ve mulled the topic over a glass of port in the late afternoon…) it happened after an accident forced her to take time out which she subsequently spent at the Brooklyn museum where she began studying Egyptian texts, where one thing led to the other and her eventually creating a patented salt formula, in which she first practiced her craft on chicken wings bought at the supermarket.

Working up to ten projects at a time (a sample of her current projects includes a sulphur crested cockatoo, a stillborn puppy, two squirrels and a kitten), Cagliastro offers that each ‘project’ can be finished in any number of ways (one would think at the customer’s discretion no doubt…).

“When people tell me they want to do this thing, the first thing I am is impressed. You must have really loved that animal.” Then reflecting: “I have an enormous amount of respect for the animals entrusted into my care.”

All of which makes us wonder in a culture that is obsessed with youth and life how refreshing it must be on some level to preserve the legacy of the dead, and the fact that there is a demand for her services reflects the fact that many pet owners aren’t so willing to let go of their pets so easily, which suggests more about our affinity towards those things that we love, and cherish to the extent that some of us will even consider attempting to physically preserve the memory and the semblance of that animal at hand.

Like most good things in the world, Cagliastro is willing to teach you how it all works (surely some of you must be curious) and towards that end she has taken to teaching class using bullfrogs.

After deep thought Cagliastro adds ‘that she is fascinated by this thing called death.’

Which has us wondering how refreshing, considering so many of us are concerned with life, but then that might be the secret to appreciating life, in order to fully understand its meaning, its winding course one sometimes is forced to consider the moment it ceases to exist and when it begins to exist on another level. Something that you can now do if you have a spare afternoon or two on your hands to attend one of Cagliastro’s classes, and yes the sorceress is adamant that she will eventually begin mummifying human beings- now personally I think that should really see a nice uptick in business, don’t you?