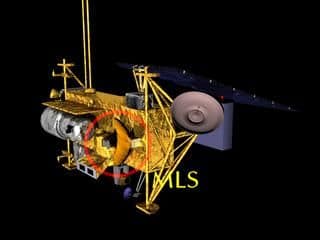 Is it just me, or do things seem particularly unstable at the moment?  I know everyone says that all the time, but 2012 is approaching (the election and Armageddon), the weather’s weird and gloomy (nothing like storm clouds over Manhattan to get in the mood for the apocalypse), some planet’s in retrograde, people keep telling me, the best of minds are giving second thought to this whole protest going on, that Nicholas Cage Losing His Shit video’s gone viral, and my Facebook feed is littered with activism—sometimes actual dialogue, not just maniacal ranting that I note for satirical purposes.  Worse yet, this feeling that something dramatic might happen is getting under my skin; I’m finding myself repeating people’s fears that magnetic charge of the North and South Pole is bound to reverse, could be soon.  It’s troubling when excitability betrays the cool-customer persona I cultivate.

This NASA satellite had me freaked out.  I heard about it word-of-mouth—a bus-size satellite called UARS , launched in 1991 and died a few years ago, due to plunge uncontrollable to the Earth, putting a mass the size of Texas at risk– and the thought that dead space junk was about to land god knows where, god knows when was a little disconcerting.  Aren’t there experts for this sort of thing?  Can’t they send Ben Affleck up there to blow it up?

Well, I don’t know if you realize, but we’re still alive and that satellite already landed—in basically the safest possible place, way south in the Pacific.  Experts were more than happy to provide feel-good, affirmative quotes for the occasion: “That’s the way it should be. I think that’s perfect,” said Bill Ailor, director of the Center for Orbital and Reentry Debris Studies at the Aerospace Corp. “It’s just as good as it gets.” Looks like I was worryin’ for nothing; ain’t that always the case.

The thing is, on Saturday the US Air Force calculated UARS would land somewhere in Canada, based on reported sightings in the area and spread over the Internet.  Obviously, Canada’s a whole different hemisphere than where it landed, but apparently debris started landing way earlier than the specialists thought and in a much safer zone of risk.  Most of us are more than content to deal with our own little bits of ivory and let rocket scientists contend with theirs.  Go about your business and let the experts do the worrying.  However, in this case, the experts were wrong.  They were half a world off.

NASA seemed evasive at the press conference of how they were so off in their calculation, relying on essentially on word-of-mouth, it seems–something I allow myself to do, of course, but expect more from astrophysicists. “NASA won’t say how it knows the climate research satellite came in earlier, referring questions to the U.S. Air Force space operations center.” Good policy to safe face—throw the guys that got everyone freaked out in the first place under the bus.

So, were safe in the hands of very accountable and knowledgeable federal organs.  NASA changed its policy 25 years ago when they realized the huge satellites they were sending up would inevitably come crashing down, but there are still those pesky old ones that keep coming.  Up next is the German satellite ROSAT, due to fall November-ish, maybe October. It’s smaller than UARS, and the chances of being killed are only 1-in-2,000 (slightly higher than the UARS risk; those Germans know how to keep calm ), so I wouldn’t worry about it.