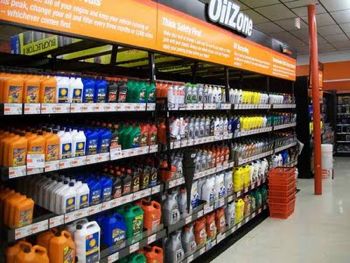 Now comes a gripping story of robbery gone awry with its fair share of sordid assault, car chase, pistol whipping, and an ironic twist at the end, all culminating in a dramatic climax only a Hollywood screenwriter could come up with.  To borrow a phrase from my favorite paid-off industry capsule reviewers, fasten your seat belt for a wild ride!

It was a quiet night at a San Diego AutoZone store, my sources tell me (i.e., KGTV San Diego).  Two employees, one male, one female, were just wrapping things up for the night when Adrian Osuna Avena, 25, and Juan Pablo Perez, 34, walked into the shop, pulled out pistols, and marched the two into the back of the store.

A little birdie tells me (i.e. Lt. Andra Brown, the officer assigned to file the police report) that Avena and Perez forced the victims down onto the ground, tied them up, then repeatedly hit the male employee in the back of the head until he told them the code to the safe and cash registers.  Avena hauled the female employee into another room and sexually assaulted her (class act, pulling her into another area). After they got the money and the male’s wallet and phone, Avena and Perez fled, using their flashlights to spot a getaway vehicle.

It just so happens that a 17-year-old was parking his 2007 Saturn sedan just south of the AutoZone; upon spotting the two crooks’ flashlights, Avena and Perez held up the youth by gunpoint and took off in his car.

Police recognized the stolen vehicle shortly after the stick-up, but when they tried pulling the men over, they sped off.  It was a chase, first down eastbound state Route 54 then down southbound state Route 125, until BAM! the Saturn got a flat tire.  (Not the most inspired use of onamonapia, I know.)  Turns out the thieves stole the wrong car; the Saturn was serendipitously near that AutoZone for a reason!

After the car rolled into an open field, the driver ran off, chased by one of the K9 police dogs. Officers went ahead and arrested the passenger.  The K9 bit the driver and officers tracked him down to some bushes.  Avena and Perez were booked downtown on charges of commercial robbery, conspiracy, carjacking, sexual assault and carrying loaded firearms.  End of the line, dullards.

Now, tell me that’s not an exhilarating story?  The stakes keep getting higher, the victims cruelly beaten, outlaws delineated as Manichean opposites to the innocents, and justice served at the end.  All in a days work.  Plus it really makes ya think, huh?  Does life imitate art, or art imitate life.  You can’t come up with this stuff!