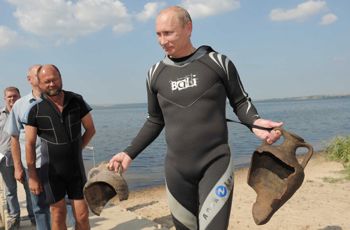 Then a plane flew by trailing, “MISSION ACCOMPLISHED” in skywriting, just in time for the photo op.

Thanks to Russian Prime Minister Vladmir Putin, archaeologists will finally get back those two missing urns be quite busy studying two newly discovered vases dated roughly sixth century AD.  Putin went diving off the Russian coast of the Black Sea Wednesday and miraculously, in front of swarming press, came across the amphorae in just two meters of nice clear water on—and this was only his third dive!

Yahoo News: “Treasure!” a dripping wet Putin told reporters with a big grin. “They drank it all already,” he added when asked if there was anything left in the jars.

Putin even had a fall guy on hand to enhance his rugged image, metal tycoon Oleg Deripaska, the pansy who ‘forgot his wetsuit’ and couldn’t go in. “What, you ran out of money?” Putin cracked in front of the press.  This Putin is hilarious!

And if you doubt the veracity of the Prime Minister’s tough-guy-image, just look at the facts:

He has flown a fighter jet into Chechnya and descended to the bottom of Lake Baikal in a special deep-sea vessel. Russian media have published photos of Putin wearing his judo black belt and stripped to his waist on a hunting trip.

One of his more daring escapades one year ago saw him chase whales off Russia’s Pacific coast with a crossbow in hand.

“Living in general is dangerous,” his office later quoted Putin as telling a reporter at the scene. He later piloted a Formula One car on a circuit near his native city of Saint Petersburg.

What idiot would vote for anyone else besides Putin?  This man is a living legend!  Later this week he will be curing cancer, finding the Holy Grail, walking on water, then flying to Mars.  About time our world leaders show a little macho panache.