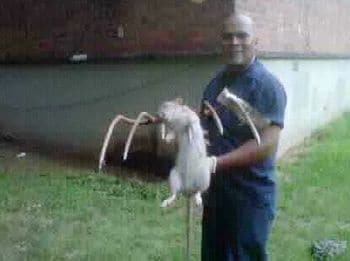 Maybe it’s the hurricane fever sweeping the city, or that I just saw The Rise of the Planet of the Apes, but I am feeling the nature-gone-wild-and-rears-its-ugly-head stories.

Take this one, for instance: at Bed Stuy’s Marcy Houses, residents have been living in fear of giant, seemingly mutant rats with pouches.  The New York Daily News reports that Housing Authority worker Jose Rivera took charge when filling a rat hole last week: seeing three of them scurry away, he nailed one of them with a pitchfork. “I hit it one time and it was still moving,” Rivera said. “I hit it another time and that’s when it died. I’m not scared of rats but I was scared of being bitten.”

Good thinking, since if these abominable creatures bit you, you’d probably get an abominable case of the plague.

The photo of Rivera with his trophy-rat has made the rounds, and animal experts have identified the beast as a Gambian pouched rat, a common household pet.  (Whoever owns one of these is just asking for trouble).  It’s a nocturnal rodent, grows up to three or four feet long, and lives around eight years.  Ominously intelligent, they’ve even been trained to track land mines. Not surprisingly, they can only be procured through the black market now, since they were held responsible for the monkeypox outbreak in 2003!

Supposedly they cannot breed an underground super-race with regular old rats, but stranger things have happened.  Till then, they terrorize the local cats and residents.

Now, the plot of The Birds went a little something like this, no?  Woman buys pet, takes it to a foreign habitat, members of the species inexplicably go wild, all hell breaks loose.  Marcy Houses, the worst may yet to come.  With earthquakes disturbing the geological stability of ground beneath us, Irene on her way, these formidable creatures could very well wreak havoc in the near future.

Lest we forget: you can drive out nature with a pitchfork, but it always comes roaring back again. If only I could convince my pet hamster to share its cage with one of them critters…