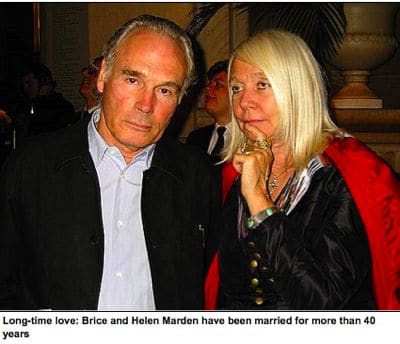 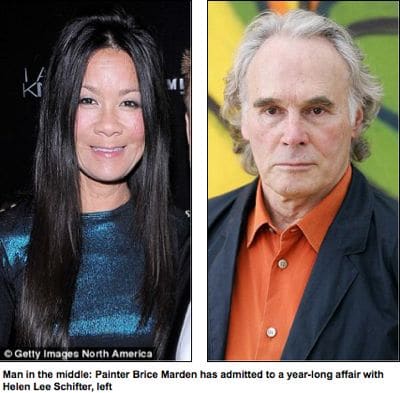 Oh dear, what to say, where to run to? It seems one of best kept secrets prizes in society, famed abstract painter Brice Marden has found himself in a tenuous position. What tenuous position you wonder? The kind that involves your wife who you have been blatantly deceiving and the mistress ( a Vogue editor thank you very much) whom also happens to be deceiving her spouse.  Which in some way could possibly make for its own unique abstract expression. Or maybe not…

dailymail.co.uk: One of the world’s most acclaimed artists has admitted to having an ‘non platonic’ affair with a former Vogue writer, even though both of them are married.

Abstract painter Brice Marden, 72, admitted to trysts with Helen Lee Schifter, who is 18 years his junior, behind the back of his wife, also called Helen.

The affair is said to have gone on for more than a year and culminated in an extraordinary fight at an exclusive Manhattan restaurant between the two Helens.

Extraordinary fight in an exclusive restaurant? That must have had a few heads turning right? Personally if it was me caught in the middle of this fracas I would have turned around and ordered myself a fine glass of red and casually watched with indifference as my wife and my mistress amuse the bejesus out of me tore each other’s hair out. But then again I’d might have to worry about what the press might have to say the next day…

Mrs Marden is said to have walked up to her at Bar Pitti and said: ‘Are you the ***** that has been ******* my husband?’
At this the entire restaurant is said to have burst into applause.

nypost: Helen Marden, also a painter, confirms she slapped Schifter — who is married to Tim Schifter, co-creator of Gwen Stefani’s L.A.M.B — in front of a packed room at West Village favorite Bar Pitti.

But Schifter desperately denied an affair to us, claiming her relationship with Brice, 72, was merely that of “artist and muse” and he had apologized for his wife. Now, though, it appears she might be better-suited to being a storyteller’s muse. Following our story yesterday on the showdown, Brice told us: “She was not my muse. Our relationship was not platonic. I did not apologize for my wife, who slapped her.”

Never mind according to the quiet birds that like to flock on my door stoop the fracas is over for now, tear drops have dropped, new promises have been made and everyone has gone back to pretending that they are all great platonic friends. Such are the affairs of a particular kind of society…