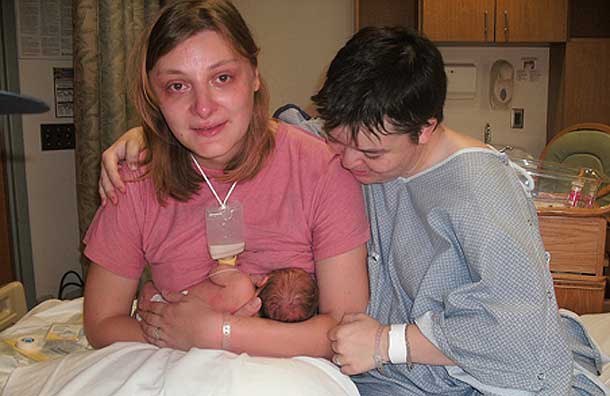 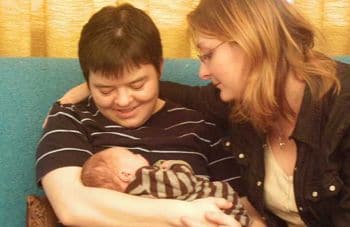 How’s this for unconventional: about twenty odd years ago, Cai was born a girl; Scott born a boy.  Eventually, Cai became the man he is today, Scott became Emily, and the two moved in together as a couple. Then, Cai got pregnant.

The two told the Daily Mirror that they were not even trying to have a biological baby, since it seemed impossible for either to get pregnant.  Cai was taking male hormones and was thought to be sterile—that in addition to birth control injections– so they safely assumed they could have unprotected sex.  Cai did not notice he was pregnant until seven months in.

During the pregnancy, Emily underwent sexual reassignment surgery, though Cai is happy the way he is.  The family will soon be the subject of the Discovery Channel’s Pregnant and Transgender.

With baby Dante now 22 months old, the couple found themselves fitting nicely into their respective gender roles.  Regarding the baby’s upbringing, they emphasize love and honesty: “We’ll be upfront with him,” says Emily. “We’ll explain the situation, and that it doesn’t mean anything is wrong or that he’s different. We will say mummy couldn’t have babies so daddy did it for her.”

While this all seems fairly unobjectionable, I wonder how the documentary will end up portraying the family?  Emily is quoted in the article as seeing her and Cai as a happy “heterosexual couple”, while Cai seems to stress how the unconventionality and difference in how they did things.  And what’s wrong with relishing in being different than the norm?  The family is anything but “normal”, and there in lays their significance.  Shying away from that would only reaffirm the belief that all people, no matter their sexual identity, want only to be “normal.”

Emily and Cai’s story fulfill a fairy tale—the love-at-first-sight narrative; the against-all-odds pregnancy—but we have to ask: whose fairy tale is it?   Since their story hits these certain points, a transgender story becomes more palatable to society, affirming what presumably everybody wants: love, marriage, a biological child—right?  Since this outcome would be impossible for so much of the transgender community, whom does it represent and whom does it speak to?

Then again, Emily and Cai can forge their own fairy tale by foregrounding what’s not on the surface.  Yeah, they look like the average family, but look a little closer and that illusion might shatter.  That’s the kind of fairy tale I like—ones with a little transgression thrown in.