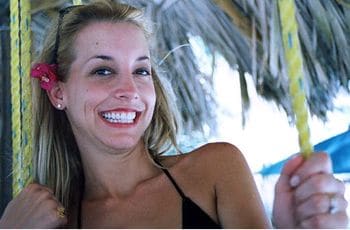 America will soon have a new did he or didn’t she kill her case to entertain itself with for the balance of the summer.

Authorities at present are on high alert pursuant to a impromptu getaway that one woman, Robyn Gardner took with Gary Giordano, who it turns out has a criminal history and record of domestic violence, as they set off to Aruba last week, with Ms Gardner at present nowhere to be found.

Miss Gardner’s disappearance was brought to the attention to authorities courtesy of her boyfriend of 2 and half years, Richard Forester whom she had had a fight with before accepting, Gary Giordano’s, a man she had only met recently on an online dating site, invitation to travel with him to the Caribbean Island of Aruba.

Apparently the two had been communicating right up to the moment she had disappeared and when Mr Giordano was seen attempting to board a plane returning to the US he was pulled off for questioning. His response to date is that Ms Gardner went snorkeling one evening but somehow failed to return. Of course he on the other hand, didn’t fail to return, nor did he alert authorities of Ms Gardner’s disappearance after she purportedly failed to return from the purported snorkeling expedition. Does this sound familiar to another episode which had America running amok in hysterical fits?

To date the coast guard has searched the vicinity where it is said that Ms Gardner went missing but no trace of her has been found. The coast guard also added the area where she is meant to have gone missing is notoriously known to be peaceful and not subjected to swirls or currents.

As of publishing, no word on what has happened to Ms Gardner, nor why Mr Giordano, who remains in custody failed to notify authorities of his travel companions abrupt disappearance. So much for impromptu getaways…