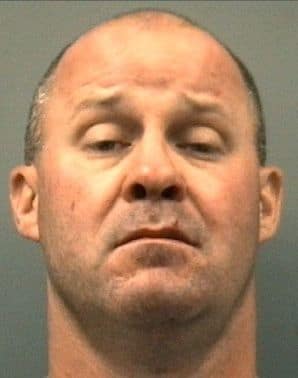 Times must be tough when a middle-school football team is forced to hire the resident hothead In-School-Suspension supervisor as a coach, as a Kannapolis, NC school has come to find out.

According the Salisbury Post, school was just resuming Thursday afternoon at Corriher-Lipe Middle School, but Jared John Gallagher was not feeling the giddy spirit. After football practice, the boys were headed to the locker room when Gallagher pulled a 12-year-old from the crowd and proceeded to choke him.  Head coach Douglas Pruitt told Gallagher to stop, so what does he do?  Fights Pruitt, of course.  Pruitt starts dialing 911?  Pull his arm behind his back.  Parent gets involved?  Punch his lights out.

By the time police arrived, the unstoppable Gallagher had a bone to pick with the officer wanting to question him: he wanted to know why he was wearing ‘those goddamned sunglasses.’ With fists clenched (yes I agree with you something not quite right is going on upstairs with Gallagher) Gallagher then proceeded to demand that the officer ‘TAKE OFF THOSE SUNGLASSES!!.’ When the officer did not, he stepped forward.

“Are we going to do this?” asked Gallagher.  With one hand on his taser, the officer told Gallagher to put his hands behind his back.  Yet he was not backing off.

You may think it’d take one tasering to put down Bane incarnate, but you’d be wrong.  Once Gallagher was shocked initially, he simply pulled out the prongs and kept on charging.  It took a second taser from behind to restrain the man.

Whoo, quite a tale, huh?  Let’s take a deep breath.  Now you may safely think that the story is over, but oops! wrong again!  Assistant principal Gary Barringer comes into the fray, asking for Gallagher’s keys to the school, because this madman is suspended.  This search led to the maniac’s truck, which lo and behold, held a 9mm pistol and 79 rounds of ammunition.  When there’s smoke, there’s fire.

Gallagher was charged with misdemeanor child abuse, misdemeanor possession of a weapon on educational grounds, and misdemeanor resisting arrest.  Among his victims, the twelve-year-old boy was the most shaken, but we’ll wait and see if he continues his football career surrounded by a bunch of lunatics.

Now, dear reader, sigh a sigh of relief, for the gruesome story is over.  Now let’s all forget about this little isolated incident, because football is a healthy, happy sport divorced completely from aggression, and Corriher-Lipe Middle School would like to have a good year, despite this little mishap.