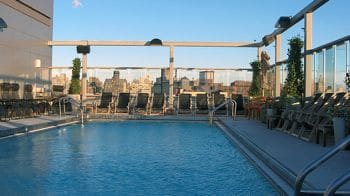 Trying to get to the bottom of what actually constitutes some parts water and the rest possible fecal matter. The Hotel Gansevoort is now taking your summer reservation.

In a study commissioned by the NY Post (yes I know one ought to be immediately suspect) the journal came to the interesting discovery that out of the 6 swimming venues it tested the one where you might expect it to be the most sanitary (maybe because it costs a few hundred dollars a day just to have the privilege to take a dip there) turned out to be at the bottom of the heap.

The five that outclassed it? The city’s public pools.

The hotel pool was the only one to test positive for coliform bacteria, which could indicate possible fecal contamination, and had the highest levels of “solids” — organic and mineral particles that shouldn’t be there.

What they may actually be leaking we will leave to your discretion.  But maybe that shouldn’t surprise us because when you get to spend up to $300 a day just to have the privilege of doing what uhm comes naturally to you then that may in the end be exactly what you end up doing.

And the cleaner pools?

The Crotona pool in The Bronx, Red Hook in Brooklyn, Dry Dock in lower Manhattan, Astoria in Queens and Tottenville in Staten Island had water so clean, Mullen said, “they nearly meet drinking-water standards.”

As a side note the Gansevoort deferred in returning the Post’s phone calls. Oh well, maybe that olive at the bottom of the pool isn’t part of someone’s olive martini but something else?