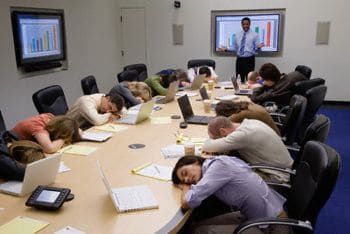 People in Switzerland are not only actively trying to ban the ubiquitous Microsoft software PowerPoint, but making a political point of doing it, as well.

Geekosystem: “The Anti-PowerPoint Party claims that the use of the presentation software costs the Swiss economy approximately 2.1 billion Swiss Francs a year (US $2.5billion). They base their calculation on reportedly unverified assumptions about the number of employees that attend PowerPoint presentations weekly, and the assumption that these presentations hold no value for 85% of attendees thus costing companies money from the loss of productive work hours.”

A political party we can trust: using “unverified,” guestimated assumptions.  If Americans can have the Tea Party, why can’t Switzerland have it’s Anti-PowerPoint party?

The seemingly farcical issue carries considerable consequences, though: If the group gains 10,000 signatures to effectively make PowerPoint presentations illegal, then “the group is free to run candidates in the next national elections in October.”

Surprisingly, some Americans have already spoken out against the software, as well.  In an article titled, “We Have Met the Enemy and He is PowerPoint,” The New York Times reported on April how US military leaders were up in arms over PowerPoint presentations: “PowerPoint makes us stupid,” Gen. James N. Mattis of the Marine Corps, the Joint Forces commander, said this month at a military conference in North Carolina. (He spoke without PowerPoint.) Brig. Gen. H. R. McMaster, who banned PowerPoint presentations when he led the successful effort to secure the northern Iraqi city of Tal Afar in 2005, followed up at the same conference by likening PowerPoint to an internal threat.

It is entirely possible that all those bullet points, chart and graphs and storyboards ignore the deep-seated breadth of situations at hand.

Unfortunately, at the end of the day, Switzerland’s Anti-PowerPoint Party appears quite dubious.

Geekosystem: “The party has a long way to go to meet the 100,000 supporters mark, because since its inception in May it has only signed up 245 members. Additionally, Anti-PowerPoint Party founder and president Matthias Poehm has admitted that he is trying to drum up publicity for his new book, “The PowerPoint Fallacy.” While the Anti-PowerPoint Party is free to join, members must pay for Poehm’s manifesto at the reduced rate of €17, down from the regular price of €27.”

Marshal McLuhan said that the medium is the message.  Now does it not follow that political parties can organize around a platform that makes the banning that cold medium as uninformative, tedious, and unproductive a top priority?  The Luddites did it; why can’t Switzerland?

In other words, is it not refreshing to see this sort of earnest rancor towards something so banal?