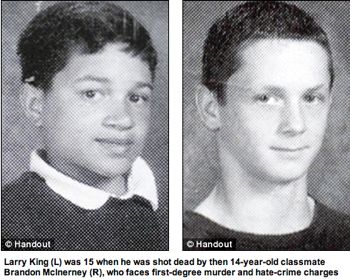 Brandon McInerney was fourteen in 2008 when he shot dead his fifteen year old classmate, Larry King, in his school’s computer lab, in front of teachers and students.  Three years later, McInerney is facing first-degree murder and hate crime charges in Chatsworth, California.

King was demonized at school for his sexuality, and the two boys had a history of bullying and fighting.

Daily Mail UK reports: “The day before the shooting on February 12, 2008, one of McInerney’s friends told authorities that Larry uttered the words ‘I love you’ as he passed McInerney in a hallway, according to court documents filed by prosecutors.

“The friend said McInerney told him he was ‘going to get a gun and shoot (Larry),’ according to court papers. One of Larry’s friends claimed McInerney told her, ‘Say goodbye to your friend Larry, because you’re never going to see him again.’

The following day, as the boys sat in a computer lab, McInerney drew a .22-caliber gun from his sweatshirt and shot Larry in the back of the head.

Prosecutor Maeve Fox wrote in court documents McInerney ‘then stood up as Larry collapsed to the floor, looked around at his astonished classmates and delivered a second coup-de-grace shot into the back of Larry’s head.’

Whatever remorse McInerney felt did not come immediately, it seems.  His actions read as cold-blooded even for a fourteen year old.  But what motivated King to tell McInerney that he loved him?

It could have been just another taunt meant to provoke McInerney; nonetheless, McInerney’s defense will spin it as sincere.

LA Times: McInerney’s lawyers, Scott Wippert and RobynBramson, say their client doesn’t deny the killing. But they argue it was voluntary manslaughter because the adolescent was provoked by King’s repeated sexual advances.

What’s interesting to me is the approach of the defense at the moment: Daily Mail: “Bramsonsaid last week outside the courthouse, where jury selection was underway, [McInerney] shot King ‘in the heat of passion caused by the intense emotional state between these two boys at school.’”

Will adding the angle that McInerney might have had confusing feelings toward Henry be effective to a jury?  It certainly fuels the concept that all true bigots hate themselves, as well. But does this defense not also cast King as a predator who had to be stopped?

These boys did not seem like lovers.  “Crimes of passion” implies mutual amour fou, which I doubt either of these boys felt.  To ascribe such adult ardor to a child contradict the defense that he was indeed a very young man who acted on impulse.

The recent wave of moral panic toward bullies provides an occasion to scapegoat McInerney; due to the severity of his crimes, he is being tried as an adult.

Both boys were quite troubled.  McInerney came from an abusive home and purportedly owned neo-Nazi paraphernalia.  Before King’s death, he was living in a centre for abused and neglected children.  Nevertheless, the boys will become archetypal; the event will play out in an arena specific to gay rights and hate crime justice.

LA Times: “The killing triggered an emotional outpouring that included candlelight vigils across the country and a day of silence in April organized by the Gay, Lesbian & Straight Education Network, a New York-based group dedicated to preventing harassment of young gays and lesbians on school campuses.

“Students at the school, E.O. Green Junior High, organized a peace march attended by hundreds in the days after the shooting. Several states have passed laws specifically outlawing bullying of homosexuals at school, and California strengthened its own anti-bullying laws.”

Fortunately, the school system came up with a fitting response to the event; it remains to be seen what the justice system will do.