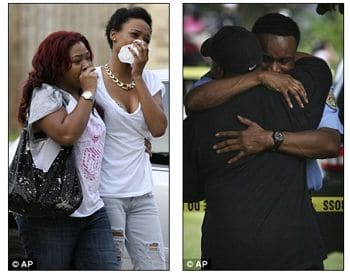 What awaited partner and father Ronald Peters as he came home later that evening.

Like most mornings, Ronald Peters would bid his partner Nadia Braxton, and their three daughters, Kayla,12, Nayax, 18 months old and Nyla six months old well before he would set out for the construction site where he toiled to keep for his family.

That unfortunately changed for the worse yesterday when Mr Peters returned at approximately at 5pm to the family house not to find the usual pitter patter of eager children hungry to see their father, but that of a complete decimation of all that he believed in and treasured.

Curious and somewhat concerned, by the steely silence of the family home, Mr Peters then ascended to the bedroom upstairs where he found to his total incomprehension, his three children deceased, shot, lying lengthwise across the bed, with the body of their mother lying perpendicular to theirs on top of them, with a bullet that had entered the front of her forehead and exited at the back of her skull.

As police were brought on to investigate particulars, it was disclosed to date that there had not been any known calls of disturbance to the Braxton house in the past and that family members were ostensibly shocked and dumbfounded as to what compelled Nadia Braxton.

As neighbors came out to witness the parading on police cars, one of them, George Windstein, reflected: ‘They kept to themselves.

‘We never heard from them, let alone had any trouble with them. They’re the kind of people you’d be glad to have for a neighbour.’

At present no charges have been charged and investigators are still trying to put together the puzzle of this baffling quadruple murder. But what motive do you need to kill yourself when a man who loves you and who only yesterday had the world to offer you and your children is overcome with grief?

Such it seems are the incongruous episodes of the human condition. May all rest in peace.