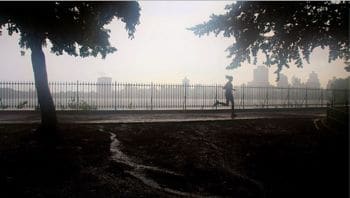 It’s my reservoir and I’ll swim in it all day if I want to!

For those of you who like to go jogging around Central Park’s reservoir,  it can be quite a sight. That said, joggers yesterday afternoon we’re offered the unique sight of one man swimming in NYC’s drinking water supply…

nypost: An overheated dope went for a dip in the Central Park Reservoir this afternoon and then refused to get out, forcing firefighters to drag him to shore, officials said.

The man, described as a white male in his 40s, allegedly scaled the chain-link fence at the Jaqueline Kennedy Onassis Reservoir and jumped into the 40-foot deep body of water sometime before 3 p.m, officials said.

Firefighters responding to the scene ordered the man to get out of the water, but the stubborn soaker remained floating, officials said.

Refused to get out because he was working on his breast stroke, because he was mindlessly caught in the patina of geese silently wafting in front of him, or maybe because he was just taking a pee in the wide expansive reservoir that he had managed to secure all too himself?

The man was then drifting about 20 feet from the northeast edge of the reservoir, and three FDNY firefighters swam over to him with a yellow rope and lassoed him, officials said.

The man was pulled to safety, lifted over the fence and placed on his back, where paramedics checked him for signs of drowning.

Checked for signs of drowning? Not signs of self disillusionment, self grandeur, a flask of the good shit, or a missing flipper in his right hand pocket?

The man, whose name was not released, was taken to St. Luke’s Hospital and is listed in stable condition.

Isn’t it time you one day also found the courage to jump into NYC’s drinking water supply and quietly waft in it before the fire department is sent to retrieve you from your giddy afternoon’s adventures?