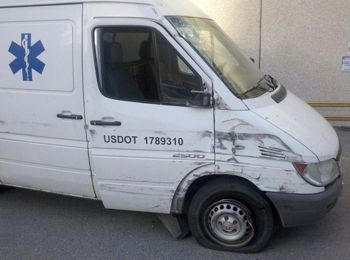 Who does not love a tabloid news item rich in irony?

The Anchorage Daily News reports that a local man apparently noticed a community service van with its emergency lights blinking parked in a hotel parking lot, jumped in the driver’s seat, took it for a spin, crashed it, drove some more, then walked off.

The kicker: Police spokesman Lt. Dave Parker reveals, “The intoxicated clients onboard were apparently unaware their ride had been hijacked, Parker said. “Often, they’ll fall asleep in the CSP van,” he said.

My heart goes out to these poor sots, their vulnerable state being taken advantage of so a rebel-rouser can have a little fun.

The Community Service Patrol is funded by the city’s Department of Health and Human Services and picks up inebriates on Anchorage streets after they’ve had too much to drink. Attendants take the people to a sleep-off center attached to Anchorage Correctional Complex.

Donny Weston, 35, caused quite the commotion by driving onto oncoming traffic, and many people reported the van to police.  Before police could catch up to the van, though, Weston managed to collide into a tour bus (firefighters had to pry open the bus’ door so passengers could get out), then drove to a nearby bar, the van now having a flat tire.

“He made no attempt to go into the tavern,” Parker said. “He hopped out of the vehicle and ran down an alley, going eastbound.”

A witness who saw Weston’s reckless driving chased him on foot and pointed him out to an officer, who arrested Weston near the log cabin Visitor’s Center on Fourth Avenue, Parker said.

No harm, no foul?  Hardly: no one was injured during the escapade, but Weston did do about $30,000 in vehicle damages.

Weston is charged with vehicle theft, criminal mischief, leaving the scene of an accident, driving while intoxicated, driving without a valid license and reckless endangerment, police said.

That’s a laundry list of charges for a little joyride.  But Weston is also quite the creep: According to court records, Weston has been charged in the past with criminally negligent homicide, manslaughter, sexual abuse of a minor, failing to register as a sex offender, assault, criminal mischief, and minor consuming.

It was only a matter of time before Weston added onto his already long list of criminal misbehavior.

What is about kind, liberal policies that encourages people to flip them on their heads?  What was Weston thinking when he came up on this van?  That a bunch of drunks like him would surely enjoy a little cruise banked by the state?  Community service?  I’ll give them some community service…

I suppose when a policy tries to tend to bar flies, we should keep in mind the mental state of the inebriated, and know that blottos will perversely try anything to mess everything up.

Drunks: they can be such a handful to take care of.