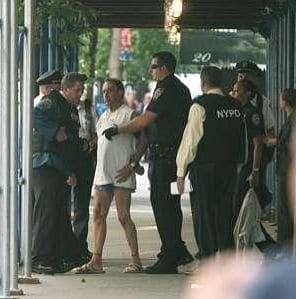 Relying mostly on Twitter and tipsters, Gothamist initially reported that gunman was holding his wife hostage, though this was soon refuted.  Many claims were put out then shut down: shot were not fired; the episode was not happening at Argo Tea nor the Flatiron (though the café was evacuated for a half hour); it was actually a nearby building involving a window-washer and an elderly man.

At present, the Huffington Post report seems the most solid:

A dispute led an elderly man to allegedly brandish a gun at a window-washer working outside his Flatiron District apartment this afternoon, a police source told The Huffington Post.

The window-washer called 911 after climbing down the scaffolding and a small army of police officers arrived on the scene moments later.

The cops then asked the assailant to come outside the apartment but he refused.

The standoff lasted about an hour and a half.   Snipers were on rooftops, but eventually emergency units broke into the man’s apartment and took him to the Bellevue Hospital.  There were no reported injuries.  All in all, one window-washer getting threatened set off quite a fiasco.

Ironically, all this goes to show how much social media has changed the game.  Little tidbits of misinformation dissipate shockingly fast and get reported as news.  Every citizen is a reporter now without necessarily training or credibility, with professionals relying on their accounts to publish in their reputable journals, thereby creating an overwhelming climate of fear that could have been avoided.  Breaking stories get juiced up, yet never exclusive nor authoritative.

But what other choice do we have?  Twitter provides immediate, free, first-person accounts.  Who needs to send out a reporter when Lauren Sowa tweets that the gunman was wearing Daisy Dukes?  Journalist’s jobs are covered, pretty much.  After the dust has settled, all they need to do is piece together the bits.

And was the gunman in fact wearing Daisy Dukes?  Thank heavens for the New York Post.  We can always rely on them to get the facts and name the names: The suspect, Kenneth Clarfield, 69, turned out to be a “hoarder” who has rarely left his apartment over the past 30 years, according to one police source.

When he has ventured outside, Clarfield usually wears a colorful bandanna and sits on a fire hydrant on his block, said neighborhood resident Daryl Glenn, 45.

“I’ve seen him in the neigborhood for 20 years. It is a little odd that he sits there, Glenn said, adding, “My friend was in the building on his floor. He’s pretty shaken up.”

Now at least we have some context to fear this crazed man.  Never trust a reclusive hoarder with a penchant for short shorts.  He could be your neighbor.