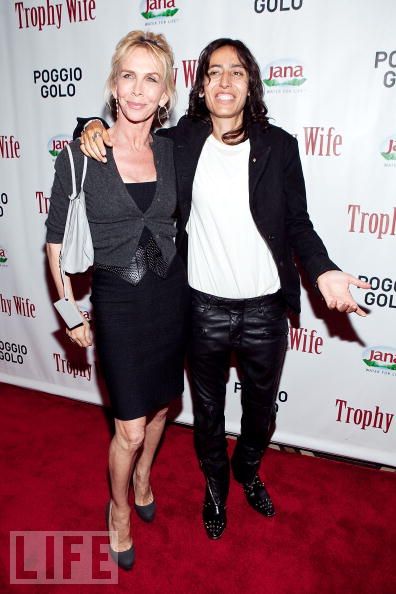 Such an individual exists in the visage of newly acclaimed film director Voula Wolf Duval, who with her new short film ‘Trophy Wife,’ (soon to be made into a feature) filmed as a high voltage sexually charged coming of age story of two young women on a collision course to existential angst and being. The supposed things that make so many New Yorkers tremor with anticipation no doubt…

It’s a lazy Sunday afternoon and to my right sits the demure slinky Ms Wolf, and opposite her the wily figure of Mr Stuart Wrede a literary manager for what arguably could be the hottest flotilla of screen writers and directors in NYC.

SCV: Watching Voula’s film I couldn’t help think it was a film that on some level was replaying themes close to heart?

VWD: Yes, well- I think it’s a journey so many people go through. What makes it intriguing to me isn’t so much that it’s a film who’s lead characters are both female who happen against chance and fate fall to for each other, but a film that explores the dichotomy, polarization and tension of what happens when you do go against what’s expected of you.

SCV: Is that to say society has expectations?

VWD: I think they’re everywhere. Some more obvious, some subtle. In the film you have a situation where you have two people who fall in love with each other, but because of circumstances can never be together, because society will not allow it. I think that’s the real tragedy for me. That these people want to be with each other but society wont let them.

SCV: Stuart, I’m curious, how did you and Voula come to meet?

SW: It was a dinner party. As it so happened we’d been seated next to each other and there was a certain feeling about Voula I had. In the end I went home thinking this one is going to be calling me, and in fact she did.

VW: I had this intuitive feeling that Stuart would be able to lead me in the right direction.

SW: I think one thing that so many people aren’t necessarily aware of are the dynamics involved when it comes to making a film. And not just making a film, but best protecting the writers, introducing them to the appropriate directors, financiers, producers, and so forth.

It’s at this point Mr Wrede reveals that upon graduating from NYU’s film school that he went out west before eventually returning to the east coast where he became head of development for famed director Barry Levinson which then led to other opportunities, film sales and then managing screenwriters, actors and directors with his current concern: Wrede/Vainshtein Management (partner Inga Vainshtein) as well as now producing films (Die in a Gunfight being in his recent expose starring Zac Efron)

SCV: Making films is only just a recent phenomena for you Voula?