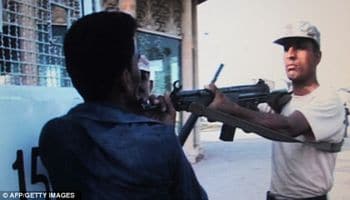 dailymail.co.uk: After pleading for life on his knees, an unarmed man is shot at point blank range by a military police officer before being left to bleed to death in the street.

In the footage, a plain-clothed man grabs the victim, who allegedly robbed someone, by the hair and drags him over to a group of paramilitary rangers in Karachi, Pakistan.

He is forced to his knees with his hands behind his back. He pleads for mercy, then one of the soldiers shoots him twice – once in the leg and again in the arm.

And it is from this moment on that Sarfaraz’s life descends into the darkest pits of hell. 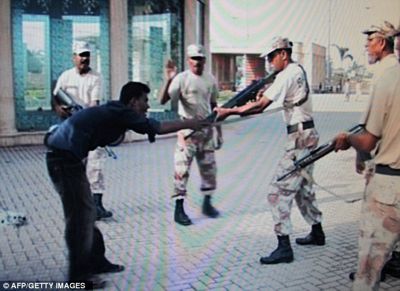 The man, identified as Sarfaraz Shah, falls to the ground and screams in pain. He then tips over and passes out as blood spurts from his gaping wounds.

In the horrifying footage, the man dies in front of crowds of uniformed officers, as they chat and look on, standing in the street. 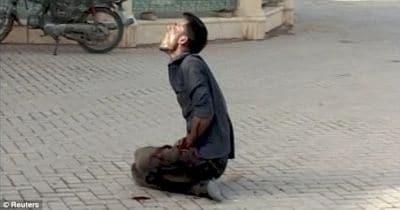 Mr Shah’s death could be said to be emblemic of the disentegration of Pakistan’s human rights records. Remarks Zohra Yusuf, head of the Independent Human Rights Commission of Pakistan:

‘It shows that our law enforcement agencies have truly become trigger happy and the brutalisation of society that has come about as a consequence.

‘It’s very very disturbing and it’s been happening too often.’

Yet that is not the way the army presents it. Rather they describe the incident as an encounter with an armed criminal. Never mind not once do we ever see Mr Shah bearing arms.

Unfortunately the situation only gets worse:

The cameraman who shot the video has received anonymous death threats, his boss at local station Awaz TV said.

To date the video has gone viral within Pakistan, but little word whether the army has been made to bear any consequences.

So much for justice and the oppressive heavy handed rule of the land. But then again, this is Pakistan, where the law of the jungle holds more sway than the value of one man. Sometimes one has to wonder who the real terrorist is…