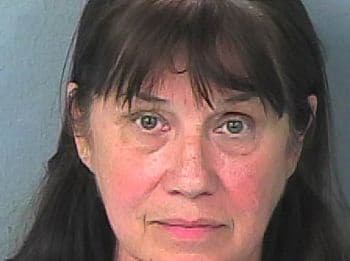 What happens when you’re a school teacher who’s being verbally tormented by one of her students? You sock them in the face. Of course tell that to the authorities.

The teacher is seen landing at least one punch to the student’s face – but weeks after she was arrested, prosecutors said the video doesn’t prove she wasn’t acting in self-defense.

“You can’t tell if he actually made contact, but it’s certainly reasonable to believe that it could have happened,” prosecutor Brian Trehy told the newspaper.

In the video, Hadsock is heard saying “Step back right now!” before punching the student. “He pushed me,” she said afterwards as a girl says “Oh my God! He didn’t do anything. You can’t punch him in the face.”

Students who witnessed the dramatic incident in Hadsock’s art class said that the student had landed the first punch on the 64-year-old teacher after he called her a variety of obscene names, according to reports at the time of her May 11 arrest.

All of which raises the question under what circumstances should a teacher be able to defend themselves, and how does one go about defending themselves if the need arises- especially if it’s disputable if any real force is used? After all it’s one thing to perhaps resist if struck or pushed against the wall, but another thing to then clench one’s fist and strike. And what about if it’s just a matter of the child grating on the teacher’s nerves- how long will it be before we tacitly approve a teacher from boxing the agregious student across the head. But then again with some students attending school with knifes and guns can we really fault a teacher fearing for their life? Which begs the bigger question – how did we end up with teachers and pupils physically confronting each other in the first place?

You might also be interested to know that this was the first time in 23 years of teaching that Hadstock has been disciplined. Let’s hope it’s her last.