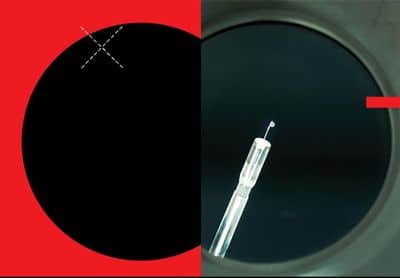 I’m admittedly late to the game (mea culpa) but I was not overly eager to look into the prospect of a doctor injecting my scrotum with, well, anything. Nevertheless, here we are. A scientist in India, Sujoy Guha, has apparently perfected a reversible vasectomy-equivalent that is 100% reliable.

The cringe-inducing process involves injecting a nigh-microscopic amount of a polymer coating into the vas deferens that incapacitates sperm as they pass through. Basically your little swimmers are taken out of the commission before they have the chance to be somebody.

Where it differs from a traditional vasectomy is that nothing is severed. None of your precious tubes are tied off in an operation that may end up permanent if you decide to change your mind down the road. No.

If you’re in a monogamous relationship, this also takes the pressure off your spouse or girlfriend to take birth control pills, an experience I’m told (thanks to the hormones involved) is not entirely pleasant in the first place. I mean, who prefers to mess with their chemical make-up on a daily basis just so they can enjoy a risk-free roll in the hay?

The more I think about this, the more I can find next-to-nothing wrong with the idea. If you’re not looking to get that special someone pregnant, here is a legitimately fool-proof, permanent-for-as-long-as-you-want-it procedure that will safely subdue your sperm.  (There are a LOT of inappropriate jokes flying through my head, right now. I’m trying to show some restraint.)

This is great, it’s brilliant, and my kudos to Guha for his pioneering work in neutralizing the purpose of the male reproductive organs.  As an option, his technique (which by all intents and purposes should be available in the states soon, if it’s not already) is flawless. As a gesture towards safe sex, it doesn’t go all the way.

Don’t forget: Pregnancy is not the only potential consequence of sex. In addition to the awkward looks, lies that this has never happened before, lost phone numbers and  hurried exits out first-story windows, there’s a veritable cornucopia of sexually-transmitted diseases that you may or may not be carrying (or know you’re carrying) that this semi-vasectomy would do nothing about.

A comforting thought, I know.

Maybe the technique should be marketed only to family men who’ve decided they’ve had enough children? Or confirmed bachelors who regularly get tested for STDs? I just feel like there’s way too many guys out there who’d use this as an excuse to get out of wearing a condom and continue to spread some unappealing social maladies.

Personally speaking, I’m not looking forward to having anything sharp anywhere near my family jewels any time soon. Let me settle down first, plan for a kid or two, pretend I’m still having sex and then proceed with this miracle of modern science. ‘Til then, I’ll stick with the Trojans.