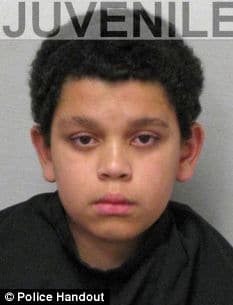 Should society be locking away children as young as 12 away for life?

In a case that shocked the nation, a 12 year old boy, Cristian Fernandez who killed his 2 year old younger brother by continuously punched his brother before eventually died a violent and merciless death could be sent away for life if the prosecution gets its way. At the heart of the matter- is such punishment warranted, especially when it involves a minor as young as 12 years old?

According to prosecutors they decided to go ahead and charge the child as an adult given his violent history. It has been said that he had previously assaulted his brother and broken his leg.

In their view, keeping the young boy away from society will ensure that no other person is ever put at risk again by the maladjusted 12 year old.

At this juncture, this author wonders quite the opposite- if by keeping the boy forever behind bars wont this only ensure that he remains hostile and deeply troubled and prone to violence in perpetuity? It is after all something that is not done in legitimate societies- when it can be argued that the young boy is still too immature to fully understand the consequences of his actions. Even if society (and this author included) fully condemn his actions.

One ought to wonder to what degree his parents harbor responsibility (the mother, Biannela Susana, in fact has been charged with negligent homicide), after all it is claimed had the mother immediately taken the younger boy to hospital rather than waiting two hours his life may have been saved. One also has to ask what the culture at home was and how exactly a 12 year old boy arrives at the idea of using brute lethal force? It could also be a situation that the child had deep emotional problems that were left unattended to (as is so often the case in so many households) or a situation were the child was never discouraged to behave the way he did because of a lack of apathy at home or a lack of discipline.

One also has to wonder if on some level the boy’s violent behavior towards his brother was a metaphor for how he really felt about his parents or the situation at home, (which is to say he exacted his hostility or sense of disempowerment through proxy) or simply a case of extreme fear of abandonment now that there was a new member in the household? After all, as humans, we sometimes resort to ways of expressing ourselves that are not necessarily clearly understood to the naked eye.

Certainly this young boy needs deep counseling, more than he needs to be reprimanded, which is no to say he oughtn’t be reprimanded. But at a base level, the above case forces us to wonder- what do we really mean when we incarcerate individuals? Do we do it to affect punishment or to rehabilitate said individual so they may one day return to society? Or a combination of both?

Should authorities seriously doubt their ability to reform this child that they have to throw away the keys- in essence ensuring two lives are lost and ruined? Is  this what we mean by punishment and rehabilitation? Or is this just a cynical ploy to assert that one is tough on crime at the expense of an individual, who at 12 years old can not be deemed to be in full control of his actions.

As an aside, one also has to wonder if the authorities would be seeking a life sentence if the 12 year old wasn’t a minority, as he obviously is but a member of a well to do caucasian family? Even if such thoughts are highly unpalatable and risk sensationalizing the situation at hand.

One has to wonder how our society will continue to migrate- after all violence begets violence.