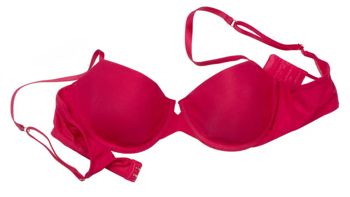 Have you been made to walk around a jail block with your bra in your hand?

myfoxdc: WASHINGTON – Two adult women are suing Prince George’s County because of how they were treated while visiting a relative in the local jail. The women say their underwire bras kept setting off the metal detector and a guard told them, “Until you’re clear, you cannot come through here.”

Sounds fair enough to us, but let’s look at what happened once these women did what they were told.

The mother and daughter went to a visitors’ rest room, removed their bras, placed them in the tray in the security area, passed through the metal detector, and walked through the jail carrying their bras.

“It was embarrassing,” said Zanaisha Walker, gesturing with her arms folded across her chest. “You know, you have to walk around covered up … with your bra in your hand … it was just ridiculous.”

The first thing that strikes us as odd is why didn’t the women just put their bras in a black plastic bag or in a handbag or even just ask to leave their contents at the warden’s office. After all you’d hardly catch this author walking around with his jocks in his hands in a jail facility. Not unless you paid me sufficiently that is.

The two women consulted an attorney and a lawsuit against the county government has now been filed. It asks for a million dollars in damages

A million dollars because they were forced to take their bras off because off the security concerns of the jail facility? Does that sound a little heavy handed to you?

Well not to Jimmy Bell, the two women’s lawyer.

“My clients asked for a female officer to be able to inspect their bra in the restroom,” declared attorney Jimmy Bell. “And they weren’t even given one. They asked for someone to ‘wand’ them. They weren’t given one. The reality is: [it’s] a policy that is demeaning [and] humiliating to women … and it needs to stop now.”

Let’s get this straight- does one really think this policy is aimed specifically towards demeaning women? Or just the awkward reality that when you are visiting a jail facility one is obliged to follow the rules? At best one can fault the jail for not having a locker facility for the visitors. But then again this is jail not the Hyatt Radison hotel.