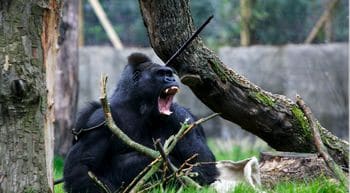 This past Thursday one gorilla clan had a family scuffle which resulted in a 7 months old lowlands gorilla sustaining a broken arm and internal injuries. Pursuant to undergoing an operation, ‘Tiny,’ the afflicted gorilla was unable to be revived.

What makes this whole incident particularly ironic is that the afflicting male gorilla- Kesho was purposefully brought in by keepers at the London zoo specifically to take on the rearing duties of a surrogate father after ‘Tiny’s’ natural father soon passed away with the birth of ‘Tiny.’ As it turned out, he was the last gorilla anyone should have brought on to assume such duties…

Kesho had been gradually introduced to the two other female gorillas at the zoo but keepers waited many months for an introduction to the youngster and his mother, Mjukuu.

Mr Field said Mjukuu had begun to interact confidently with Kesho and the The first introduction on Wednesday “went very well”.

But as most of us know, males can put on a pretty deceiving performance to claim points, which might explain how things devolved when the clan was brought together for a second meeting this past Thursday.

Kesho asserted his authority during a second attempt on Thursday, and during a scuffle between the whole group the baby’s arm was seriously injured.

At this juncture everyone is heartbroken, well except for Kesho, and if you’re wondering how Mjukuu is dealing with this, there’s this:

Keepers returned the baby’s body to Mjukuu so she could come to terms with his death.

So much for becoming the focal point of human being’s banal experiment in captivity. Trying to wean an animal like a gorilla of it’s preternatural urges and impulses is like trying to wean a lion into a fuzzy tab cat that we can nestle on our laps- assuming you dare such adventures.