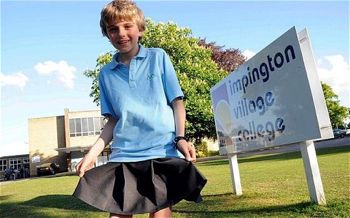 If I can’t wear my shorts during the summer months then I’m going to wear a knee length skirt instead.

Such it seems is the current fracas at one school, Impington Village College, near Cambridge, Great Britain. By being denied the ability to wear shorts during the summer months(school policy demands that the boys wear long trousers year round) the idea of what constitutes proper dress has arisen. To be sure the school is not amused…

The brunt of their chagrin? A young boy by the name of Chris Whitehead who has chosen to defy the ban, by exacting a loop hole in the school’s charter.

telegraph.co.uk: Chris believes that forcing boys to wear long trousers during the sizzling summer months affects concentration and their ability to learn.

”We think that this discriminates against boys. I will march in a skirt with other boys waving banners and making a lot of noise.

”I will be wearing the skirt at school all day in protest at the uniform policy and addressing the assembly with the student council, wearing a skirt.”

And how does the school principal feel all about this?

Headteacher Robert Campbell said the ban on shorts was imposed following consultation with students, teachers and parents in 2009.

He said: ”Our uniform policy had a significant consultation and ours is typical of most schools in Cambridgeshire and the consensus was we were going to go for that.

”The issue creeps up during the summer months.

”Ultimately the boys can wear a skirt to school because it doesn’t say they can’t in the uniform policy and we would be discriminating against them if we did not allow it.

And what of the young boy’s mother?

Chris’s mum Liz Whitehead, 50, has praised her son for standing up for ”what he believes in”.

She said: ”I am delighted that Chris is taking action on what he believes in, which the school actually encourages, so he is only doing what he is taught.

”I am really proud he is brave enough to wear a skirt to school for what he believes in and back him all the way.”

Time will tell whether the policy will be curtailed, but in the interim, at least one student is getting to feel the brisk chaff of the wind as it carreses his knees this summer.

All of which brings into focus what do we really mean by dress sense in the first place and whether the social mandates that we force on boys and girls is just an arbitrary attempt to stereotype roles?