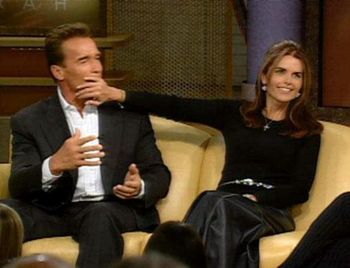 It was good whilst it lasted, but one of the most unlikeliest relationships in the corridors of Hollywood and politics seems for the time being to be over.

In answer to a Los Angeles Times query Monday, the couple issued a joint statement saying:

After a great deal of thought, reflection, discussion and prayer, we came to this decision together. At this time, we are living apart while we work on the future of our relationship.

The 55-year-old Shriver has moved out of their Brentwood mansion, but the statement stressed they continue to raise their four children — ages 21, 20, 18 and 14 — together, calling them “the light and the center of both of our lives.” And the pair appealed for privacy.

Privacy it seems will be the last thing this duo will get at the behest of a curious public, who must have wondered so long how this two managed to find each other and indeed stay together…this despite rumors that in fact Ms Shriver has ceased to live in the couple’s Los Angeles Brentwood home for some time.

The romance began after the couple met at a celebrity tennis tournament 34 years ago. It appeared to endure some rough patches, including accusations of groping women against Schwarzenegger during his 2003 campaign for governor. At the time the actor apologized for inappropriate behavior and Shriver defended him.

Even more beguiling because Shriver had her own stellar career as NBC anchor and being part of the Kennedy clan( her mother was the late Eunice Kennedy Shriver, the sister of former President John F. Kennedy).

Husband and wife have been traveling widely — and separately. She has appeared publicly without her wedding ring, as our colleague Mark Barabak notes here, and has spoken of stressful transitions in her life. And their anniversary last month went unnoted by them on social media.

Word of the split swept widely across Twitter on Monday evening with common comments such as “How sad!” and “I didn’t see that coming.”

With the demise of his political career (some would argue at his own hands), one has to wonder whether Ms Shriver exactly finds her union with Mr Schwarzenegger completely compelling, and on the same token one has to wonder what’s on Mr Schwarzenegger’s mind now he is set to return making Hollywood movies? Perhaps just a natural flow of events, or the demise of a strategic relationship that no longer bore any fruit.

So much for love in the high octane jungle…