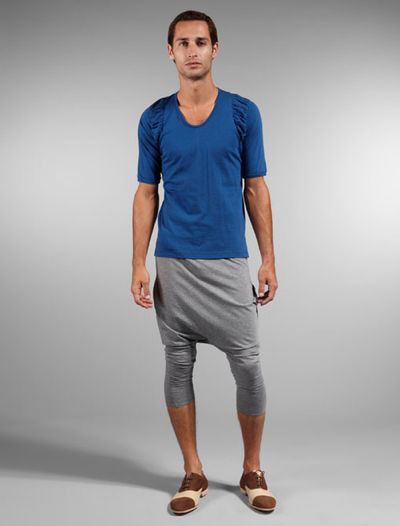 Well, let me put it to you- when was the last time you went out to dinner in Converse sneakers and baseball caps? True such entities and individuals exist (look anywhere in Times Square) but at the same time one can on any evening of the week run into a fine consortium of gentlemen and ladies (look anywhere in choice venues downtown NYC) who have taken extraordinary care to present themselves of the highest vigor and outwardly appearances. The venues that cater to such an audience know this and to be sure they maintain an unspoken rule of weaning out those who choose to unwittingly demean the spirit of good taste. How do I know this? Because I have been personally weaned out on occasion until I finally got the drift that an unkempt and stalwart demeanor were not welcome and intrusive to one’s appetite and drinking aspirations.

But in case you think we gentlemen have digressed from good taste comes this hopeful nugget:

As it happens, the art of looking sharp could be saved by a new subculture of metropolitan men, aged loosely from 25 to 40, who have an affinity for a new-old hybrid of sartorial swagger. With fetishistic glee, they’re following how-to-dress blogs and websites for men such as Mr. Porter, A Continuous Lean and The Selvedge Yard, and formal-informal designers like Billy Reid, Michael Bastian’s Gant, Freemans Sporting Club and Band of Outsiders. Their appropriated tastes are inspired, though, more by ’60s idols like Bryan Ferry and Steve McQueen than their own grandfathers.

Tyler Thoreson, 38, the editor of the bespoke-favoring website Gilt Manual, believes “what we’re seeing is a rebellion against our fathers, and the casual baby-boomer generation. Younger men are suddenly seeing the value of looking good. It’s not about a restaurant dictating what they should wear—if there are no rules, create your own.”

To which to be frank I couldn’t agree more. Which is to say, there hasn’t been an abondonement of good taste and formal wear, but rather a reappraisal of it, or rather a reinterpretation by the current crop of style setters, such as my dear friend Mr Peter Davis– editor of Avenue mag, who always manages with his debonair flock to look the part and strike a chord of wonderful aesthetic pleasure the minute he and his cohorts enter a room. Indeed.

And from styleite: So it’s unfair to assign the blame for dressing carelessly to men themselves. Assign it to the institutions that not only allow them to dress like buffoons, but encourage them to do so. Maybe instead of letting go of the dinner jacket rule, the 21 Club and other restaurants like it should have held onto them for dear life.

Agreed, the institutions ought to take a stance as some surely are and if we keep an open dialogue I’m kind to wonder if suddenly the missing flock of well dressed men will suddenly re appear. Which may mean in this author’s case, finally repairing the gaping hole under his second hand English leather Churchhills…