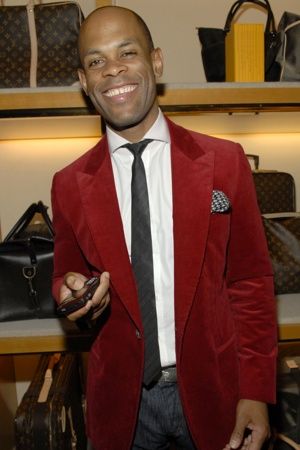 For all intensive purposes Raul Barrera was a ladies man. A staple of high society fetes and indeed once a staple of Louis Vuitton launch parties- he was considered a connoiseur of the good life. That was of course until Monday when he was charged with the murder of his live in girlfriend Sarah Colt.

nypost: “I knew he was going to kill her.”

A former neighbor of suave p.r. man Raul Barrera uttered those blood-chilling words yesterday after the sweet-talking womanizer was arrested for allegedly butchering his beautiful girlfriend — days before she planned to move out of their Lower East Side apartment to escape the controlling “monster.”

“His eyes were insane. He was a killer,” said Colleen Carerir, 24.

If that sounds dramatic, then may we suggest you have only arrived in act 1.

Carerir said she often heard Barrera terrorize Sarah Coit, 23, in the East 33rd Street building where they had lived before moving to Clinton Street, scene of the gruesome crime.

“He wasn’t human,” she said. “He was a monster. He looked at me like I was a piece of meat. I worked at Bellevue with mental patients, and they had nothing on this guy.”

An apt description of a former neighbor we wonder…?

This on top of a history of seven previous domestic violence incidents.

Now that we have served you act 2, here comes act 3- the point of no return…

He allegedly stabbed Coit over and over in the head and torso, rotating knives from a collection of eight that he had in the apartment, police sources said. Her head was also bashed in.

The attack was so grisly, it left a piece of a knife lodged in her head.

The violence around 2:30 a.m. was so loud, numerous neighbors were awakened by Coit’s anguished cries for help. Three people living in a building next door called 911 and told operators the yelling was coming from their apartment building.

Two others also called 911, and they, too, gave the wrong address.

How odd that the dapper, ‘lady killer’ actually turned out to be a lady killer in real life…Or is it?