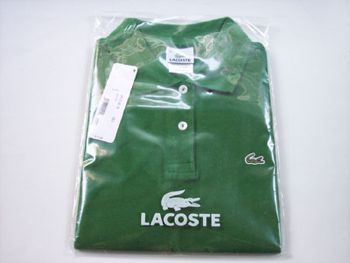 Shouldn’t you be buying Lacoste and Chanel too?

Ever thought wearing designer labels was a pointless exercise in vanity? Well think again. A new study courtesy of Evolution and human behavior (we’re still not sure who funded this study though…) claims that in fact wearing designer labels elicits the perception that your ass is holier than thou- which could be a very good thing if you’re the type of person that lacks integrity or real follow through- cause now you can buy your identity.

economist: DESIGNERS of fancy apparel would like their customers to believe that wearing their creations lends an air of wealth, sophistication and high status. And it does—but not, perhaps, for the reason those designers might like to believe, namely their inherent creative genius. A new piece of research confirms what many, not least in the marketing departments of fashion houses, will long have suspected: that it is not the design itself that counts, but the label.

In other words, strutting Park avenue with your loubitons is much a good idea as strutting your Brooklyn Industries hoodie on Bedford Avenue.

Rob Nelissen and Marijn Meijers of Tilburg University in the Netherlands examined people’s reactions to experimental stooges who were wearing clothes made by Lacoste and Tommy Hilfiger, two well-known brands that sell what they are pleased to refer to as designer clothing. As the two researchers show in a paper about to be published in Evolution and Human Behavior, such clothes do bring the benefits promised: co-operation from others, job recommendations and even the ability to collect more money when soliciting for charity. But they work only when the origin of the clothes in question is obvious.

In other words kids the trick here is to be as obnoxious and conspicuous as possible as this will elicit the most oohs and ahs, even if they are all done under bated breath.

The answer, Dr Nelissen and Dr Meijers suspect, is the same as why the peacock with the best tail gets all the girls. People react to designer labels as signals of underlying quality. Only the best can afford them. To test that idea, they checked how people responded to a logo they knew had cost the wearer nothing. To do this, they asked their volunteers to play a social-dilemma game, in which both sides can benefit from co-operating, but only at the risk of being taken advantage of.

After players were motivated by best interest scenarios it was discovered that the perceived item with no status merited little value.

Which brings into question what do we really mean by value and is value inherently a delusive act tied to our easily shifting perceptions? Furthermore are we to trust our perceptions when so often they reward the superficial- which we’re hoping is not you dear reader:

This study confirms a wider phenomenon. A work of art’s value, for example, can change radically, depending on who is believed to have created it, even though the artwork itself is unchanged. And people will willingly buy counterfeit goods, knowing they are knock-offs, if they bear the right label. What is interesting is that the label is so persuasive. In the case of the peacock, the tail works precisely because it cannot be faked. An unhealthy bird’s feathers will never sparkle. But humans often fail to see beyond the superficial. For humans, then, the status-assessment mechanism is going wrong.

In other words this spring we recommend you spend the extra dollars to buy yourself a Lacoste shirt. But in the event you’re short on cash, they’ll be sure to have them at your local dump and pump knock off house.