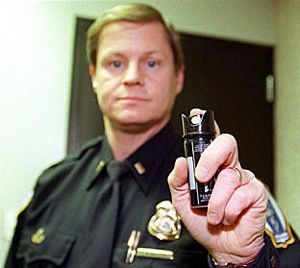 The world is getting more violent…

Do you have any ideas of how to control an unruly 8 year old boy? Well my mother didn’t when I was 8 and neither do the police with respect to new enfant terrible who goes by the name of Aidan.

9news: LAKEWOOD – When most kids throw a temper tantrum, they get time out. In 8-year-old Aidan’s case, he got pepper sprayed.

A Lakewood Police report details the second grader’s violent temper tantrum in a classroom at Glennon Heights Elementary on Feb. 22.

According to the report, Aidan “was climbing the cart and spitting at teachers. He also broke wood trim off the walls and was trying to stab teachers with it.”

Stab teachers with it? Well, that’s an interesting sport to want to play. One can only begin to wonder what got Aidan interested in that ‘funny’ game?

“I wanted to make something sharp if they came out because I was so mad at them,” Aidan said. “I was going to try to whack them with it.”

The report goes on to say Aidan, “was holding what looked like a sharpened one foot stick and he screamed, ‘Get away from me you f—ers.'”

To be sure Aidan is one tempestuous little boy. Speaking of which, who’s also tempestuous are the older boys- called police officers…

Lakewood Police officers ordered the 8-year-old to “drop the stick.” When he refused, they sprayed him with pepper spray twice until he dropped the piece of wood and was handcuffed.

According to the police report, the boy was later treated on the scene for “a red, irritated face.”

Does this strike you for a moment as an apt way to respond to the misadventures of a young boy? Or is age irrelevant when a flinging piece of wood with nails is in the periphery? Personally I would have ducked and used something called common sense, but these are drastic times we are living, so if we can’t expect our little 8 year old boys to use discretion, prey how can we really expect the same from the police? Don’t you agree?

Aidan’s mother Mandy, whose last name 9NEWS has chosen not to disclose, believes the Lakewood Police officers should have handled the situation differently. She says police were called on her son at school twice before, and both times the officers were able to talk to her son and calm him down.

“I’m sure what he was doing wasn’t right, but he’s 8 years old,” Mandy said. “They walked in, asked him to drop the stick, and then sprayed him with the spray… I think it’s excessive.”

Excessive? Well at least the police didn’t go looking for a stick with nails to wield back at young Aidan, unless of course they attempted to?

Aidan admitted he has problems controlling his anger.

“Just kind of like whenever anybody upsets me,” he said. “Like I just kind of want to tear them apart… I think it’s not ever going to go away… It’s just who I am.”

Interesting. I wonder if the police are willing to admit they have a problem or two themselves? Well better not ask- after all there is that can of pepper spray to worry about…