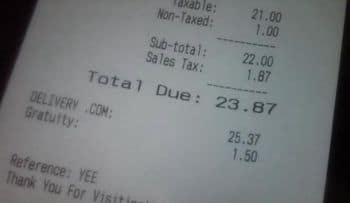 How much should you tip on a pizza being delivered to your doorstep ? How about if you have 3 pizzas delivered at the same time?

Larry Fox, a 20 year old designer and developer (do they really exist that young?) has started a blog account on tumbler called; “≤15%: a bunch of shitty tips”

Why you wonder? To humiliate terrible tippers like you.

gothamist: Larry Fox, a 20 year old designer and developer, has a side job making deliveries for Brooklyn restaurants. He’s not satisfied with some of the gratuities he’s received, so he’s created the website 15 Percent to shame those who have screwed him and others out of their rightful remuneration. And he’s posting the names and addresses of the allegedly lousy tippers, too.

Will Larry’s site now become the must go to place for potential future employers, boyfriend/girlfriends looking to see if you’re really the great guy/gal you say youare? Or it just a vanity exercise on behalf of some young man looking to extort Brooklynites?

One entry on the site, submitted by a delivery person named “Sam Paul,” reads, “No tip [address redacted] last night, in middle of third monsoon of evening. elevator opens, i drip on floor, he laughs at me. i say 20 dollars, he says here’s 20 dollars.” Another goes a little something like, “[Name redacted] at [address redacted] tipped me one dollar to bring him a sandwich during a hail/rain/thunder storm….I hate you [redacted!]”

Well you have to admit- a dollar tip in a hailstorm is pretty bleak- but then again – what was Larry looking for on a $7 sandwich? A $4 tip (thunderstorms aside)?

Then there’s the other question- when the service says free delivery is that just a bold faced lie cause in reality there’s the glum look of some guy like Larry waiting to receive you when you open the door and pray on the fact that everyone deserves a handout – cause that’s what you get trained to do in a service economy and you look like a starving refuge.

He describes his Tumblr site, which launched a few days ago, as “a blog documenting people, and companies who have never seemed to work in the service industry, or don’t think to tip at least 15% on deliveries, and instead opt for 2 dollars on everything. This is for all the people who have been handed $80 on a $78 order and told ‘keep the change.’

So no matter if the same energy was expended delivering a package that cost $18 or $78 should delivery guys be expecting a tip of at least 15% on all items delivered- or have they confused delivery for fine food waiting?