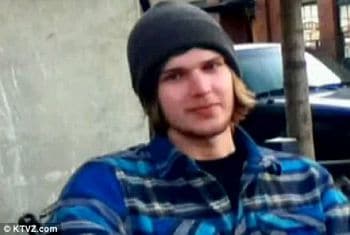 Joy and wonder suddenly turn to horror and grief.

For all intensive purposes it appeared when Kipp Rusty Walker got on stage during an open mike performance at the Strictly Organic Coffee Company set that he was going to give audience members one rousing performance. Ironically that is exactly what he did, but not in the way the audience anticipated- when unbeknownst to those in the audiences who were cheering and clapping him on, thinking it was all part of the act- he took a out a 6 inch knife and repeatedly plunged it in his chest before slumping to his death in a pool of blood.

dailymailco.uk: The bizarre suicide has left the community of Bend in Oregon stunned and wondering why he would end his life in such a public way.

But questions will be asked of mental health authorities after it emerged that Walker had told friends of his plan and had threatened to kill himself before.

On that occasion he had been taken in for treatment but was released back into the community.

Released- because he was cured of whatever ailed him? Or was that just a momentary diversion in this young man’s troubled ways? And what of his desire to kill himself in public? Was that a gesture to share his grief with the world actively or a morbid attempt to shock the audience? Or was his death like the stage a type of performance art that took theater to its ultimate form- literally?

One of Walker’s friends claimed that he had been planning to kill himself in a public place for some time.

The friend said: ‘It was almost like he wanted to prove a point, like there’s no point in being scared of death because it’s going to happen to us anyway,’

And what of the audience?

The suicide has split opinion in Bend. Some people are sympathetic to Walker’s plight, others are outraged over his actions.

On the website of newspaper The Oregonian, one reader going by the name of Quashi wrote: ‘As the aunt of a talented young artist who also took his life at the age of 19, I am so saddened that he was not able to reach out to his friends and family for help.

‘We will never know the level of pain he suffered from so deeply that he chose to take his own life. Nor will he ever know the pain felt by those he left behind. This lasts forever.’

Another reader, Judahlevi, commented: ‘It is always a tragic act for someone to take their own life since all life is precious.

And perhaps this is the penultimate irony- that the troubled young man only through death was able to affect those around him perhaps in a way that he was unable to during his life. Or to be precise – his death in some perverse way served to liberate him as much as it served to traumatize the audience- a feeling he had perhaps known all too well during life…