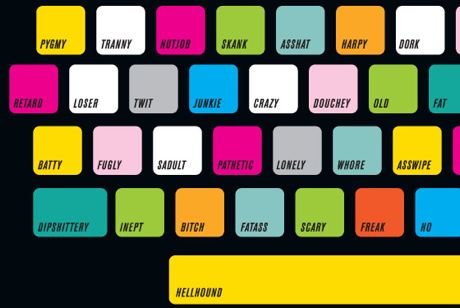 The truth is, more than a month after the revamp, traffic still hasn’t started to bounce back. Whether you’re looking at traffic rank, reach, pageviews (%), or especially pageviews per user, Gawker has not yet come close to reaching its old heights. So this begs the question: why? Was the redesign really so bad that it drove away more than 25% of readers?

I’ve thought a lot about this question, and my gut says no. Sure, there are problems with the new user experience, but nothing so egregious that people should be swearing off Gawker forever. So if the site design isn’t what is keeping people away, it must be something else. It must be the content.

To find out what changes were happening to Gawker’s content over time, I selected two time periods: Monday, March 7 and Tuesday, March 8 of this year (March 7 selected because it is exactly one month after the redesign was launched), and Monday, March 8 and Tuesday, March 9 of 2010. My intent was to compare the amount of original content produced before and after the redesign. To do so, I classified all posts in each day into one of four categories: Original Content, Links (to other Gawker media sites), Roundups, and “Blurbs.” See the end of this piece for further explanation of these categories. Next, I did a word count of all Original Content posts, with pull-quotes removed. Finally, I found the ratio of non-quote words in Original Content to the number of Original Content posts that day. The results were shocking. 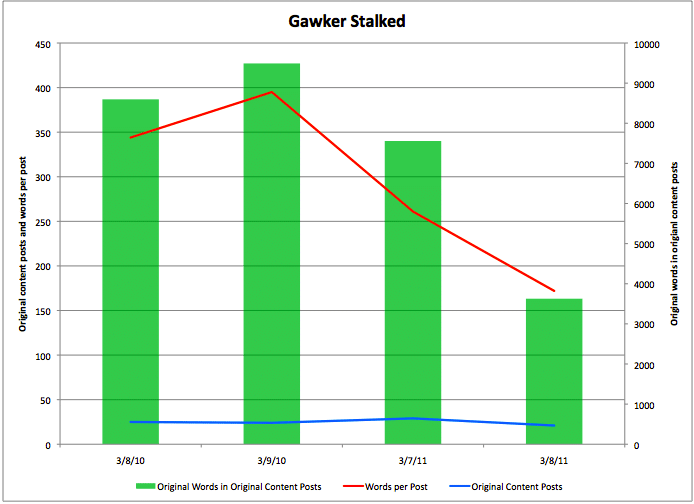 As you can see above, while the number of Original Content posts has stayed roughly the same over time, the amount written has dropped precipitously. Out of fairness, one 1,630-word Oscars summary post from March 8, 2010 was excluded from the tally because it seemed unfair to compare it against the 2011 data, when the Oscars were held weeks prior. Even with this adjustment, last year’s Gawker was producing significantly more substantial Original Content than the FrankenGawker of today’s internet/television/magazine gallimaufry. Part of this can be explained away by the fact that Richard Lawson does not seem to be writing as many epic T.V. recaps as he did in 2010, but the discrepancy cannot be attributed to this alone—after all, a 2,800-word post on The Real Housewives of Orange County was included in the March 7, 2011 data.