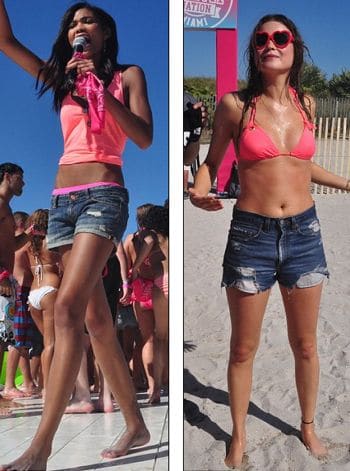 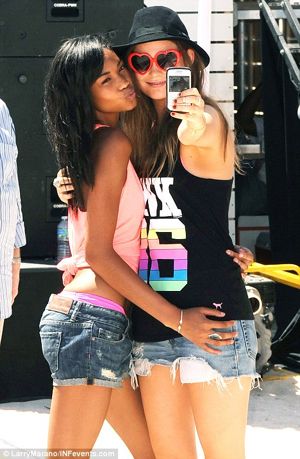 I’ll always be more photogenic than you…

In case you’ve started seeing half naked girls parading about town lately- there’s a reason for that and that reason is Spring Break- code word: if I’ve got the brawn, the curve, a beer keg and the right bikini I’ll always be game…

That said- Victoria’s Secret models got into the action down in Miami. As usual the dailymail.co.uk explains how they managed to captivate humanity.

Victoria’s Secret models Chanel Iman and Behati Prinsloo helped to get Spring break celebrations under way in Miami in Florida today. The pair, who were dressed in attire from the brand’s Pink range, hosted a Pink Nation beach party which was being filmed by MTV.

The cast of the network’s show The Buried Life also joined in.

And of course the paparazzi were magically there to bring us all the festivity, because what’s life really mean without a few half naked girls egging us on?

Chanel, 20, and Behati, 21, sunbathed on white deck chairs in a VIP section of the beach as they watched the party rage around them. 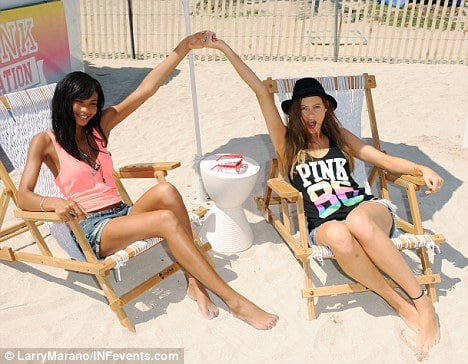 Later they both got involved in the festivities stripping off to their bikinis and splashing around in the Victoria’s Secret inflatable pool and water slide.

The girls also spent time dancing and taking pictures with fans as they enjoyed the amazing Miami weather.

Kids- let’s be honest- me and the chipmunks are perspiring under the bedcovers just looking at these pictures: 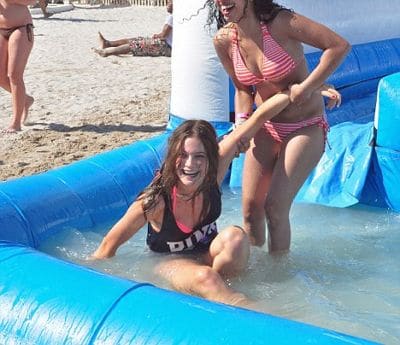 One day when I wake up from another dreary hangover I will look in the mirror and for a split second I’ll suspend belief and pretend that the pink satin straps around my mouth are a makeshift bikini strap courtesy of my new title in life- Victoria’s Secret model on a sunny spring break day.

Don’t you wish you could fit in that bikini too?