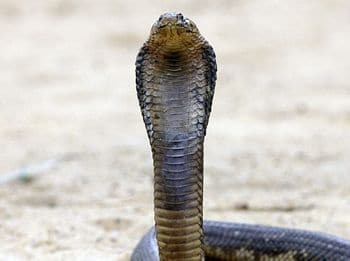 In search of a venomous deadly snake…one day it’ll turn up.

Day 4 and still no sign of the missing Bronx zoo Egyptian cobra snake. What to do, where to hide and what should you do in the event it turns up under your bedcovers tonight?

nytimes: The case of the missing venomous snake in the Bronx Zoo has yielded much interest, many press inquiries and even a fake Twitter feed or two. What it has not yielded is the snake, a 20-inch female Egyptian cobra born a few months ago.

On Monday, otherwise known as Day 4 of the cobra hunt, zoo officials put out a statement cautioning that they may not find the adolescent cobra for days, and perhaps weeks.

A few days, weeks, months- that ought to re assure every New Yorker, never mind those New Yorkers who have an aversion to being bitten by our missing friend.

But don’t dismay the zoo has a strategy in place:

“We understand the interest in this story and that everyone wants us to find the missing snake,” James J. Breheny, the zoo’s director, said in the statement. “Right now, it’s the snake’s game. At this point, it’s just like fishing; you put the hook in the water and wait. Our best strategy is patience, allowing her time to come out of hiding.”

Sounds like one hell of a plan doesn’t it? As for me, I’ve been spending the afternoon on Best Buy’s website- trying to figure out which welcoming mat I should get should the Bronx snake turn up next to the tin cans of discarded moonshine juice I like to keep in the hallway. One has to offer as much encouragement as possible. So far, I’ve settled on the boysenberry matt finish rug, but I must admit the tethered daffodil Emu rug looked appealing too.

But experts said cobras are generally averse to human contact and unlikely to bite unless they feel their lives are in peril. In this case, the snake’s small size would make it even less deadly because its glands are smaller, said Rulon W. Clark, a herpetologist at San Diego State University.

“The actual danger in a situation like this is very low,” Mr. Clark said. “These aren’t animals that view people as meals.”

Low or not, I’m spending the next few weeks shrouding my bedroom with as many discarded tin cans of moonshine as I can, at least the rugs will act as some sort of camouflage….