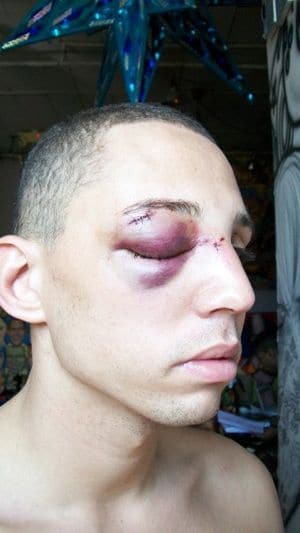 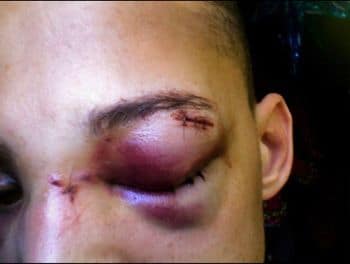 When will the negative stereotypes and lack of understanding stop?

Inciting violence against another human being because of their sexuality, faith, color of skin or ethnicity should never be tolerated and yet it seems to be an ongoing practice right here on our very doorstep here in NYC.

That said, it’s time to visit the horrific case of one young man, Damian Furtch who early Sunday morning received a vicious beating at the hands of 2 individuals who at this present moment remain free. I’d like to warn the readers from the outset the pictures which document the violence against Damian are not a pretty sight, but we don’t think the assailants had pretty things in mind when they went to work on Damian.

dereklovesshopping.com: Damian was attacked early Sunday morning around 4:30 am after leaving McDonalds in the West Village. Damian says he was wearing a more ‘flamboyant’ outfit than usual in accordance with his role at The Pink Teacup.

As a gay man myself, I have to say.. I am constantly worried about this, I work for a celebrity stylist who rolls out wearing the most outlandish / glamorous outfits I have ever seen! He has brought out this beautiful part of me, where I feel so much more comfortable  wearing camp clothes. Should we be worried about being attacked because we are not being subtle?

Damian was approached, then viciously attacked, by two men who while punching him in the face yelled “You fucking faggot!”

Fucking faggot? What compels two men who have never met another man in their life to violently lay their fists into his soul? Repressed homosexual desires? A lack of awareness or respect for other ways of being? A deep unseated self hatred played out against those individuals whose countenance is too close to home? Negative stereo types in the community? A re inforced and vilified code of behavior that endorses such prejudices by the church, the community or other social leaders, or by even the media or our culture at large? Or how about a deep unseated despair and self aggrandizement of self that can not help but explode on others when in actuality the disdain is wholly directed at oneself? 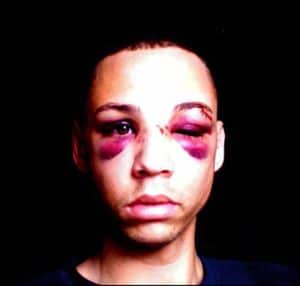 The men seemed to be of  Latin ethnicity, and one of the men (pigs) had a gothic style cross tattooed under his left eye. When I spoke with Damian he was clear to me that this was not a ‘he stole my bike’ situation where peolpe have fights in the park. This was a clear, vicious and vulgar attack on a gay man.

Damian luckily got away and managed to make his way to a hospital and contact the police, After having a complete break down, he had 4 stitches inserted above his eye and his nose will have to broken and re-set.

Which has us wondering what else needs to be broken and re set?

Damian and myself were talking about why he thinks this happened to him, and its clear how random the attack was. You never really know when these things are going to happen, its totally horrific that peolpe have the power to do such awful things whenever they want.

Of course the real irony is these people have no power, because if they did they would never lower themselves to maliciously hurt another human being the way they did. How ironic that two men sought to hurt another man because they perceived him inferior and lacking of some sort of correct constitution, when in reality the truth is these individuals are doused with self loathing of their own masculinity. So much for power  I think….

Let’s not allow this to happen, shouldn’t we instead try and reach out and have an honest dialogue about what really concerns us and how we can all find sustenance and pride within ourselves collectively?