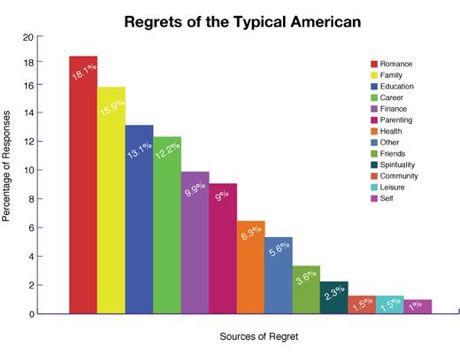 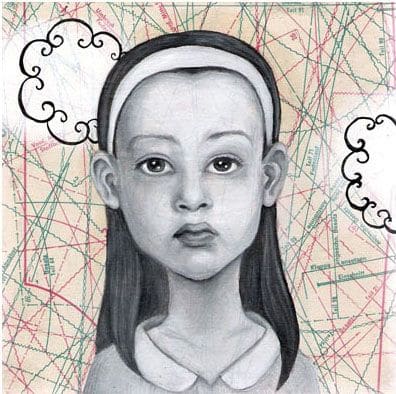 A recent study indicates that romance is the most common regret among Americans. Kellogg professor Neal Roese and Mike Morrison of University of Illinois analyzed the data from a sample pool of 370 adult Americans.  Participants were asked to describe their main life regret in detail via the telephone, and surprise, surprise! Romance took the top spot.

Holding a Bachelor of Science degree in Psychology, I will use whatever tiny amount of credibility I may have to shed some light on the romantic regret status of our country.  First of all, just to be clear, sample pools are weak at best.  Phoning 370 Americans may be random in theory but that doesn’t mean it provides accurate results.  There are so many variables that come into play.  For example, what time were these phone calls placed?  If participants were called during the day I’m going to guess that many of the women were housewives who are not currently working.  The men pooled may not be satisfied with their careers, because if they were I highly doubt they would have the time or interest to detail their biggest regret in life to a random stranger.

I’d also be interested in knowing the gender of the questioner.  Women are generally good cold callers in sales companies because they come across more sympathetic and trustworthy than their male counterparts.  With this being said, the sampled participants might have felt more comfortable with a female questioner and therefore would have revealed more honest answers. In my opinion, I find it hard to believe that men would openly state romance as their biggest regret (even if they felt this way) to a male questioner.  That would seem “unmanly” by societal standards.  Men might also hesitate in expressing romance as a regret to a woman because that too could be interpreted in their minds as weak.

People also tend to regret instances in their life that directly challenge their identity.  For example, women generally put more emphasis on relationships, verbal communication, and nurturing behavior.  These characteristics become an integral part of their self-identity as they go through life.  Society directs women to base their self-worth on physical appearance.  For men, society encourages them to make a lot of money because money equals power and power equals a perfect life.  This mentality is instilled at a young age and becomes a part of their identity.  When a man is fired from work, this puts a dent in his self-worth and the experience will be more dramatic for him because it challenges his self-image.  For a woman, an ended relationship is more negative because she may internalize the experience and take it as a personal failure.

This is of course not always the case.  There are many women who place more concern on career and gain confidence through successful business deals rather than a happy romantic relationship.  For business minded women, they will often find themselves moving to thriving cities where career is the focus and they don’t have to feel the pressures of getting married or having a boyfriend to feel complete.  Likewise, men may place more value on their physical appearance than they do on their career; or in some cases their careers may depend on their appearance (male models for example).

Results from this study also indicate that a regret of doing something is more intense than the regret of not doing something, while the latter is longer lasting.  This makes sense because regretting something you did means that there is a visual memory associated with the action. Wishing you had done something you never did is only imaginary in nature.  Furthermore, when recanting regrets, embarrassing moments, and bad behavior to a friend, one often exaggerates the details.  Over time, the exaggeration becomes the truth in one’s mind, meaning that the actual event wasn’t nearly as horrific as he or she now remembers it.

Perhaps if we all make an effort to downplay the importance these regrets play in the overall outcome of our lives we will be happier or at the very least a bit less dramatic about the consequences of our actions or non-actions.  But where’s the fun in that?  Deep down, maybe Americans want their lives to feel like a mini soup opera where they play the lead role in a regret-driven plot.