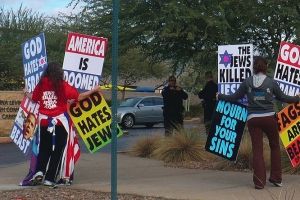 In one of the more stupid, err, strategic bouts of masochistic media whoring we care to remember (this is the internet after all), the media darlings over at the Westboro Baptist Church have just allegedly attempted to provoke the hacker group Anonymous into launching yet another DDoS attack.

The first letter, which surfaced on AnnonNews and similar sites, was addressed from Anonymous to Westboro and stated that because the church “has frequently crossed the line which separates Freedom of Speech from deliberately utilizing the same tactics and methods of intimidation and mental & emotional abuse that have been previously exploited and employed by tyrants and dictators, fascists and terrorist organizations throughout history… ANONYMOUS cannot abide this behavior any longer.” And so it was time to do irrevocable damage to the church’s websites or something like that.

Believable, perhaps. Or at least ripe Twitter fodder. But Annons grew quickly hesitant after reading Westboro’s response addressed from “Westboro Baptist Servants of god to Anonymous Coward Crybaby ‘Hackers'” with the words “BRING IT!” written in what look to be 36-point bold center-justified letters. A standard for paranoid e-ranters.

Their further assertion that “The only reason the internet exists is for Westboro Baptist Church to tell this nation & this world that your destruction draws nigh,” soon led nameless pundits from inside the hacker group to argue that the church had essentially set up an Assange-style ‘honeypot’ trap in order to collect IP addresses for suing (Westboro is notoriously low on cash) and to provoke media attention.

This would seem more than plausible, if not probable, considering statements in the response letter prophesying that “the media will predictably do much breathless anticipating” of the event “while giving another another tsunami of coverage to Westboro’s message.” This by, of course, directing readers to one of their fabulous rantsites like www.GodHatesFags.com and www.GodHatesTheMedia.com. Because what respectable tabloid or tech-writer could avoid namedropping such re-bloggable gems? Myself included.

All of which does — or at minimum should — make us wonder: Why do we care about Westboro’s or any other cultic media hungry hategroup’s most recent publicity student? Even Westboro themselves noted (to Anonymous): “All your draconian blather changes nothing.”

Well, nothing except for your number of Twitter followers, your blog’s circulation, your ‘reach,’ your Alexa rank, your page views, and your total number of readers. That is, as long as you can spin it the right way and sensationalize it enough.