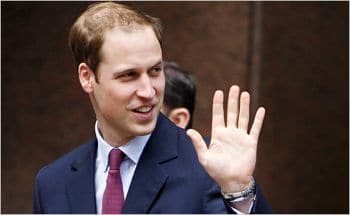 Do women really care if you are going bald or are bald? How about if you happen to be a prince?

A recent article courtesy of the New York Times has suddenly made all men going bald, slightly bald or completely bald (I fall in the middle category thank you very much…blah) reach for their mirrors and quietly whimper wonder to themselves- will the opposite sex still love them if they no longer resemble Fabio the dragon wild haired dragon slayer? The article then continues to wonder out aloud if what made Prince William hurry up and propose to Kate Middleton, his long time girlfriend was the fact that he too has been shedding quite a bit of hair follicle, and that if he were to still find a woman interested in him he was forced to ask for their hand in marriage now lest his situation excercabate over time.

nytimes : OF all the details surrounding Prince William’s April marriage to his longtime girlfriend, Kate Middleton, few seem to have garnered as much attention as his rapidly receding hairline.

Is it possible that the 28-year-old prince felt an urge to lock up a commitment from Ms. Middleton because his heart-throb status might be beginning to disappear with the hair? If so, what must the rest of the not-so-princely men in the world feel when youthful looks begin to fade?

Somehow this author feels a dissing session for us boys with less than all the hair we once had when we were 19. Ready here it comes. Ouch.

In the past, only women were perceived to have a marital sell-by date. But thanks to a convergence of social and economic trends, some men feel the same pressures.

“The clock ticks for both men and women,” said W. Bradford Wilcox, director of the National Marriage Project at the University of Virginia.

Michael Kimmel, a sociologist, said one contributing factor is the increasing economic independence of women. Mr. Kimmel, a professor at the State University of New York, Stony Brook, cited a 1930s study by Willard Waller that evaluated how women and men assessed each other’s sexual marketability based on criteria including physical appearance, social skills and financial stability. A woman of that era valued a man’s earning capacity above good looks and other traits.

Which is akin to saying, as much as my wallet means something to most females (and even that is sparse – forgive me but I am writer ladies…) – ladies now too have their own wallets and can now afford to be choosy as to whom they settle with thank you very much.

Also, men have become more concerned with body image, meaning that they are more likely to measure themselves against culturally perceived standards of attractiveness, according to Ashley Mears, a sociologist. She traces the trend to the 1980s with more advertisements and magazines geared toward men.

Who else is paying attention to body image of course is women- and even though traditionally they pay a lot of attention on other female’s body images, they are now increasingly paying attention to male body image, courtesy of all those wonderful ads of exotic looking men that most men can never hope to emulate. Which brings up the question- if I happen to be a prince, with vast sums of money and favors at my disposal why don’t I just buy myself a new hairline?- like most men of means do- well most men of neurotic means to be precise.

Men may give themselves some leeway when it comes to putting on a few extra pounds and having wrinkles (two typical areas of concern among aging women hoping to attract a mate). But hair loss — both androgenic alopecia, often referred to as male-pattern baldness, and alopecia areata, which typically involves temporary and localized shedding — can be emotionally traumatic, especially for men in their 20s.

In fact, the American Academy of Dermatology estimates 80 million men and women in the United States suffer from hereditary thinning or baldness.

Assuming there are roughly 250 million people living in the US, and of the 80 million men and women affected by hair loss, (one would wonder 75 000 men and 5 million women) that still puts the ratio of bald(ing) men way above 60% (assuming once again if there are 250 million people, then roughly there must be 125 million men and women, of which  75 million of those men represent a hefty proportion of the 125 available million men courting the other 125 million women with male pattern baldness-which leads us to wonder- if my male competitor is more often (well percentage wise 60 % of the time) to be just as adversely affected as I am should I be overtly concerned that I share his handicap? Which is to say wouldn’t I be more concerned if I was bald and only 15 percent of the male population was bald, leaving 85 % of my competitors free to roam after women I may have once had a chance in?

But the real nugget comes courtesy of Spencer Kobren of ‘the Bald truth’ when he argues the following:

Because of the blow to their self-esteem, some balding men simply settle when it comes to spouses, Mr. Kobren said. “Guys believe they don’t have much time left as they continue to lose their hair. They kind of grab the person closest to them who they find relatively attractive at the time. Emotionally it’s too difficult for them to go out there and try to court the girl of their dreams if they are feeling emotionally insecure about themselves.”

Which pauses one to consider- is a man’s sense of self and worth contingent of what others think of him and surface expectations or what he himself has set for himself as appropriate standards as to how to judge himself? After all what man hasn’t seen another man cruising the strip with a beautiful woman with half his hair missing? Can we really argue it’s his wallet that is propping him up and thus making him attractive to women or perhaps more intuitively his sense of worth that a woman instinctually is drawn to whether he looks like Fabio the raven king or not? Perhaps by virtue of not bothering with cosmetic surgery Prince William is singling out that if anything rather than feel insecure by his appearances – he feels stalwartly proud of his being irrespective of whether he fits into stereo typical male expectations courtesy of the advertising world and some 26 year old steely eyed macho ad executive/fashion designer/magazine editor etc.

Of course there are plenty of bald and balding men living happily ever after. For starters, men, like women, are marrying later in life, according to Census data. And although women rank physical features higher on their future-husband wish lists, they also care about personality, said Mr. Wilcox of the National Marriage Project. “The good news is that women are even more attentive to a man’s capacity to be a good friend or be emotionally engaged,” he said.

More attentive to his capacity to be a friend or emotionally engaged assuming he is secure in his appearances, his persona, his ethics and once in a while his finances too. Well 3 out of 4 for this author ain’t too bad- do I have any takers ladies?