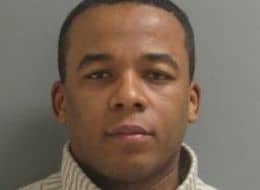 Warren Jackson wants you to know, he may be a motivational speaker who lectures against inner-city violence, but if a woman gets out of line in his presence, he’ll smack the bitch… or even worse.

Warren Jackson is a motivational speaker who works for a charitable organization called We Stop the Killings. He was arrested last Friday evening in suburban Chicago after a woman told police she saw him turn around from the driver’s seat and punch a woman sitting in the back seat. A toddler was sitting in the front passenger’s seat.

Jackson and his female companion were shopping at their local Burlington Coat Factory when the violence unfolded.

After the incident, Jackson told police the two had been arguing, but that he hadn’t physically assaulted her. The woman was taken to the hospital where she was treated for myriad injuries including deep bruises, bumps, and abrasions, said police.

In December of last year, Attorney General Lisa Madigan announced that she was taking action against We Stop the Killings, the scam charity that Jackson was running. Madigan claimed that Jackson and others “illegally reinstated a long-dissolved charity” and “solicited donations from the public, falsely claiming the funds would help prevent youth violence in the Chicago area.”

Jackson is set to be arraigned on battery charges on February 8th.

Jackson and Yolanda King, another “member” of We Stop the Killings, also ran a company called W2X that promised mortgage help to the elderly, but instead was “in the business of extracting money out of homeowners already in financial distress, leaving them in a much worse condition than prior to the purported ‘help.'”

Thank God for people like Warren Jackson, they teach you exactly who you never want to be.