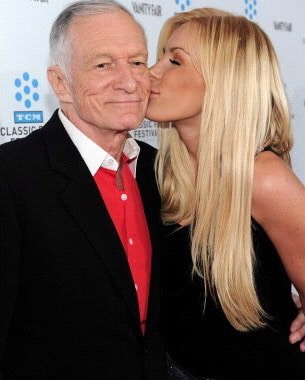 How much is that blonde in the window?

The children of downtown LA and Kashmir are all leaping with joy this afternoon with the revelation that their arbiter of cool, blonde vixens and double d breasts- Hugh Hefner will soon be joining matrimony union with his new love fantasy interest Drizzle Embarrass CRYSTAL Harris.

Dailymail.co.uk:  In the early hours of Christmas Day morning, he wrote: ‘After the movie tonight, Crystal & I exchanged gifts. I gave Crystal a ring. A truly memorable Christmas Eve.’

Then last night he added: ‘When I gave Crystal the ring, she burst into tears. This is the happiest Christmas weekend in memory.’

Not to be outdone by her fiancé, Crystal then took to her Twitter page to say: ‘The most memorable Christmas.’

And later on, to clear up any confusion, Hefner wrote: ‘Yes, the ring I gave Crystal is an engagement ring. I didn’t mean to make a mystery out of it. A very merry Christmas to all.’

Doesn’t this sound like a made to order special Xmas telethon where you get to donate your tears of happiness to save another lame blonde and her money bags enabler?

She met Hefner on Halloween in 2008 and started dating him in January 2009 while he was also dating identical twin glamour models Kristina and Karissa Shannon.

But he ended his relationship with the twins in January this year and has remained monogamous to Crystal since.

Crystal once said that she believes she and Hefner were able to bond because she lost a long-time boyfriend in Iraq and he was going through a break up with Holly Madison, whom he dated for 8 years.

Which is a roundabout way of ‘Drizzle’ describing how she able to imagine she was canoodling not to a man in his 80’s but a man somewhere near her age where biology and the laws of nature would have her whiffing. But who needs biology and sensibility when you have legacy, power, fortunes and the ability to convince girls who would normally be your great grandchildren that making out with grandpa and his ivory tentacles is an option they can’t pass up this Holiday Hollywood weekend.