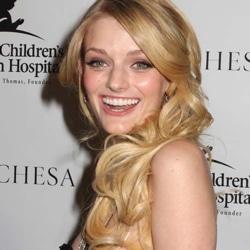 Though she’s not British, as the Daily Mail would have you believe, Lydia Hearst-Shaw, once New York’s most inimitable heiress gossip columnist prodded (courtesy of page 6), second most beautiful woman, and third most marketable media whore (those last two in the opinion of this journal) has indeed been chosen to headline the upcoming film tentatively titled ‘Dogs In Pocketbooks’: a satiric take-off on contemporary society based on the life and strife of none other than Lindsay ‘Wronghand‘ Lohan – the standard by which American, and perhaps world, culture measures celebrity.

For those of you too unrefined to have already become obsessed over the daily chatter about Lydia’s formidable social calendar, as our editor once said it: Lydia, simply put, is a prettier, classier, and far more interesting and educated Paris Hilton. Quite the billing to live up to for a public always eager to feast on the faux-pas of a new tabloid queen.

Officially, screenwriter Charles Casillo – who described the story of a bratty movie goddess in and out of rehab, in trouble with the law, and hounded by greedy agents, predatory paparazzi, stalkers and crazed media as obviously based on Lindsay – says he cast Hearst because ‘She’s one of the few supermodels who can actually act. Moreover, he says, ‘She’s smart, well read, charming and very beautiful.

This despite reports that during her much feted tenure as a Page Six columnist her articles were produced through the following process: She was interviewed by a reporter, who put her thoughts into cohesive paragraphs. But hey, that’s pretty much how things happen here and we’re not half as good looking, so who’s really judging – especially when it’s likely the that the producers could feel the planets stars aligning, an enthralling perfect storm of free, and necessarily volatile, publicity in the making.

In any case, now is the time for all you gossipers to get ready, because the 16-inch-waisted 26-year-old, who is reportedly dating Jeff Goldblum (another attractive actor who’s made a living by repeatedly pretending to be intelligent), has set media wheels in motion and begun the irreversible process of becoming the next Lindsay, the next symbol of all that is celebrity.

Just think: from now on until the release of the movie (and for sometime after) Hearst’s name and image will be blurbed, more likely than not, almost anytime we talk about Lindsay. And if there’s one thing that shouldn’t be underestimated, it’s the power of repetition and association, which have ben long regarded as the keys to brainwashing. After all, it has been often repeated: (and I believe I’m paraphrasing) ‘a lie repeated a thousand times eventually becomes a truth.’

So even though there don’t seem to be any roles for our detoxing, downward spiraling, little Lindsay – pop-culture’s first ‘un-insurable’ celebrity – we needn’t worry about a shortage of enviable opportunities for for well positioned heiresses eking out effete existences as part-time models starving by choice, but greedy to gorge themselves on fame by using any means necessary to catapult themselves into household notoriety.

Isn’t this media hype machine at its most perverse? Feeding on the remains its dying stars to produce new ones, always using what Casillo quite knowingly called the ‘crazed media’ to catalyze the cannibalistic feeding frenzy. Is this is not the unending life cycle of the media industry?

Who knows, we guess we will have to wait to read it on page 6…