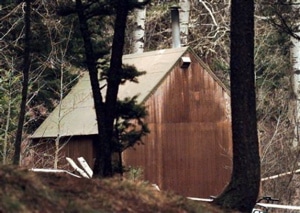 Those of you looking for a delightfully Romantic rural getaway perfect for penning survivalist themed paranoid manifestos on your preferred delusion, masterminding mail bomb plots, self-important existential philosophizing, or spreading 2012 fear-porn and conspiracy mongering may do well to check out this ‘very secluded’ piece of ‘infamous US history’: the 1.4 acre hideout previously owned by Ted Kaczynski.

Shamelessly (or brilliantly) hoping to capitalize on the anarchist pop murder icon’s well publicized path of anti-technological destruction, John Pistelak Realty in Lincoln Montana has embraced the necessary irony and listed the Unabomber’s charming backwoods safe haven on their website, with a printer friendly brochure and $69,500 asking price. ‘Don’t miss this one!’ reads the sales copy.

Enticing potential customers with pics of half a ragged hut, logs, and lots of trees (some with FBI initials still stenciled on them), the team at Pistelak proudly notes that the area is great for hunting, but doesn’t specify what exactly… Amenities include a series of fences with no clear entrances and the luxury of having no water or electricity. But move fast, as Pistelak himself stated he’s “had all kinds of calls” about the property already.

Despite such alleged interest, the price has recently been slashed by more than half, all the way from $154,500 originally  what they call a HUGE RICE REDUCTION! at Pistelak Realty. Perhaps revealing his underlying desperation to be rid of the spooky piece of property by doing what’s become unfortunately necessary; Pistelak stated, With the history, it’s got to be worth something.”

And to an extent he’s right, surely someone out there’s interested in hoarding yet another piece of morbid murder ‘history.’ So can we really fault Pistelak too much for distastefully trying to rid himself of something that’s so long weighed him down in such a stagnant economy?

If nothing else it betrays an understanding that virally spreading spectacles (usually defined by their lack of ethics or morals) have begun replacing ad campaigns, become nothing less than a medium for sales. (And now we have a spectacle of the sale itself, it seems.)  But still: one has to wonder whether this is really smartest  tactic for Pistelak, considering that the internet may not be the best place to reach technology-fearing macabre memorabilia enthusiasts fawning over the effects of Ted Kaczynski.