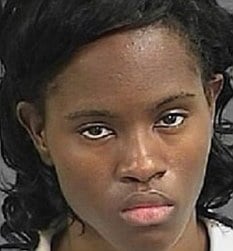 NORTH CHARLESTON, S.C. In one of the most barbaric child abuse cases to date, Shakera Wright, an 18 years old has been charged with allowing her 18-month-old son, Louis, to be tied upside down by his ankles to a closet’s coat rail whilst three teenagers used the captive Louis as a human punching bag.

Sources say Shakera only stopped the beating when Louis’ eyes rolled back in his head and he became unresponsive. According to the Daily Mail, at the hospital, Doctors told police the baby had swelling to his face, five fractured ribs, bruises on his back and his left and right torso, as well as lacerations to his spleen, liver and pancreas.

Shakera then claimed the boys  aged 14, 15, and 16 respectively  had been wrestling her son, which at which time she then stepped in, stopping them because it got too ‘rough.’ Never mind the idea that chaining her 18 year old month son to a coat’s rail never struck her as particularly ‘rough’ enough in the first place.

Which is to say perhaps Shakera Wright in her mind deemed the abuse and vindictiveness against her son as particularly brutal at the point where her son could no longer endure the pain, until then he was in some perverse way fair game to the imagination of three young thugs essentially given explicit permission by her to do as they felt by what one could argue is a maladjusted mother, swayed by some mean spirit vindictiveness, a history of her own abuse or perhaps complete apathy. Or even worse no coherent reason to begin with.

Doctors also found clues hinting that Louis had endured previous abuse, namely a skull fracture that had long healed over meaning someone may have hit his had hard enough to break it. When doctors further argued that Louis’ injuries were consistent with being repeatedly punched, it wasn’t Shakera, but one of the boys  16-year-old Tyrek Varnes  who, probably consumed by guilt, admitted the grim particulars of the sadistic torture session. However, none of them seem to have told police their motivation.

Doesn’t that pose the most difficult question: Why allow your child to be abused, almost to the death, by local teenage goons? Is it for sheer entertainment value? Strictly as a means of getting off on holding complete power over another? Or is it, like so many of the most horrifying crimes we encounter from time to time, for no ostensible reason at all…

The child to date remains in critical condition.