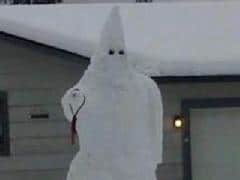 100 yards away from an elementary school, police responded to complaints that a Hayden, Idaho homeowner, let’s call him happy Mark, had constructed a snow sculpture adorned with dark eyes, a pointed hat, and a noose that, neighbors argued, looked like a rather phallic looking 10-foot-tall KKK Klansman (albeit quite a crude one).

The local news report at KXLY stated: Several area parents noticed the offensive snow sculpture, located in front of a home in the 9000 block of Hillview Drive, while taking their kids to school Wednesday morning.

Happy Mark, the snowman maker, whose surname was left unspecified, has also gained mild media attention for proudly displaying his collection of white supremacist flags (which includes memorabilia from such notable groups as Hitler’s own Waffen SS stormtroopers), and passing out bullet casings to kids on Halloween… though it’s anyone’s guess why parents let their kids anywhere near his doorstep. But the question remained as to whether he had a right to express his hatred on his own property, even if others could see it and were offended by it.

Although residents were appalled at the nerve some residents have to threaten people in the community with their signs of hatred,” police could only ask Mark to remove the noose tied around the snowman’s head, as such display of capital punishment  violates state law. Perhaps most telling was when news cameras caught Mark the happy snowman in the act of taking down his noose, only to later deny to the same said witnesses that a lovable snowman ever existed on his lawn.

While happy Mark’s behavior betrays good taste, doesn’t the promise of America’s strength lie in the guaranteed right of every individual to express their opinion, no matter how insipid, or fatuous? And though happy Mark is at best intolerant, and at worst ignorant, wouldn’t censoring him set a rather alarming authoritarian precedent? Therein, of course, can be found the inherent dilemma of allowing free expression: to reap its benefits one must also endure the absolute worst of it.

Shouldn’t you be wearing a mock Ku-Klux Klan outfit to intimidate your co workers too?