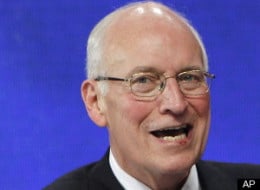 In what amounts to a ricocheting bribery case, from one entity back to the other- it seems that the Nigerian government, infamous for its very own very special brand of corruption is willing to drop charges of bribery against former Haliburton chief Dick Cheney, coincidentally infamous for his own nefarious business dealings (oh well…) that could see charges that if proven against him serving up to 3 years in jail in Nigeria dropped in exchange for a $250 million fine bribe. Which begs the question- who’s really bribing who?

Huffington Post:Former Vice President Dick Cheney, who has been charged with bribery by Nigeria’s anti-corruption agency, may avoid the charges if Halliburton instead pays a hefty fine, reports Reuters. Nigeria is considering a deal in which the energy company would pay $250 million in lieu of prosecution.

Femi Babafemi, a spokesman for the anti-corruption agency, said that the sum would include $130 million frozen in Switzerland, with the rest paid in fines, reports Reuters.

Like us, we’re sure Mr Cheney is patiently doing the math. Good bye $130 million dollars forever, possibly good bye another $120 million dollars or better still what are the chances of ever being extradited to Nigeria and then again what’s it going to cost me to hire a lawyer and is that anyway near the $120 million I’m suddenly going to have to look for in last night’s dinner pants?

Which begs the next question, how have the other defendants, co partners (always get them while they are hot) handling these allegations?

The Halliburton case involves its former subsidiary KBR, a major engineering and construction services firm based in Houston. In February 2009, KBR Inc. pleaded guilty in U.S. federal court to authorizing and paying bribes from 1995 to 2004 for the plant contracts in Nigeria.

KBR, which split from Halliburton in 2007, agreed to pay more than $400 million in fines in the plea deal.

Well, just because someone jumps off the bridge, doesn’t mean Mr Cheney should too- especially if his lawyer is claiming that Mr Cheney has nothing to do with the purported bribery. Hmm.

One day when Mr Cheney is reading his email, he will come across an email addressed to him from a vague govenrment authority claiming that Mr Cheney is the sole beneficiary of a large sum of money and a dozen oil fields which will be automatically relinquished to him in exchange for secret bank passwords. Mr Cheney will momentarily reflect and wonder to himself if that happens to be the same email he once sent to Iraq and Afghanistan officials a number of years ago?

Liz Cheney wants to investigate everybody except her daddy.
Dick Cheney rushed to hospital.
Dick (head) Cheney; The secrets he likes to keep from you…
SHARE
Facebook
Twitter