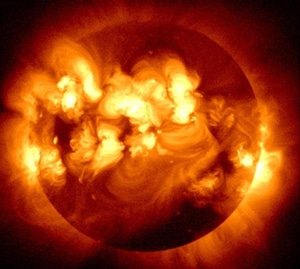 In what she’s admitted to be nothing short of an oddball scheme to save the flailing failing Spanish economy (hey, at least they’re not quite Portugal, Greece, or Ireland), 49-year-old Angeles Duran has quite officially claimed she legally owns the Sun after being issued a document proclaiming her the sole owner by a Spanish notary. Now she plans to rescue her country’s economy by taxing “everyone on the planet” for basking in her UV-rays. (Let’s just thank she beat the US government to it, they could probably pull it off and would hardly be above it.)

According to Helium online, the document “described ‘Sol’ (the sun’s proper name) as ‘a star of spectral type G2, located in the center of the solar system, located at an average distance from Earth of about 149,600,000 kilometers.’

Duran, who maintains she ‘backed [her] claim legally,’ is ‘not stupid,’ and knows the law, stated: “I did it but anyone else could have done it, it simply occurred to me first.” This because, she says, international law concerning ownership of celestial bodies applies only to states and makes no reference to individuals.

Which points out the problem in her loophole: that she was issued her papers by the Spanish state assumes that Spain, or any nation for that matter, ever had the power to grant ownership over of such a celestial body (and implicitly had the ability to control it)…

Not just an abstract problem, such a situation calls into question the relative absurdity that is owning any sort property – what is it about a piece of paper scribbled on by the right hand that enacts the quasi-magical binding contactual power of ownership over property, be it earthly, heavenly, or even of another man with the same emotions and mental faculties?

Duran, ever the hard-taxing landgrabber, is hardly looking for an answer, stating: “If there is an idea for how to generate income and improve the economy and people’s well being, why not do it?” A surprisingly worthy question, but couldn’t such an argument be made for such things as extreme as slavery (after all, far easier than the Earth or sun to control are certainly the thoughts and actions of another man)– especially considering she means ‘one people’s well being’ at the very literal expense of many other’s?